The Nigerian Media Under Siege 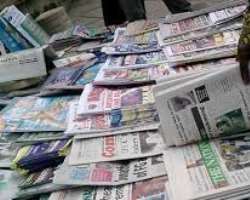 The Nigerian media has come a long way since it first berthed with the Iwe Irohin which was founded by Reverend Henry Townsend, a missionary Clergyman in the ancient city of Abeokuta. The newspaper was in the native Yoruba language and it was the trail blazer that opened up the way for the next generation of newspapers which was written in the English language – the language of the colonial masters which the colonized adopted with their local infusions in their bid to localize the world’s most widely spread tongue.

1926 was a great year for the Nigerian media as it heralded the ascent of the Daily Times which was the paper that produced some of the finest of Nigerian journalists. The colonial masters had a controlling stake in it and were ably supported by a coterie of Nigerian businessmen most notably Sir Adeyemo Alakija. Its pioneer editor was the nationalist Ernest Ikoli who was just fresh out of a job teaching at the prestigious Kings College Lagos which was the public school modeled after Eton College – the school that has produced the highest number of Prime Ministers in the United Kingdom.

Many papers came and went as the mortality rate of an average paper is usually very high. Journalism was redefined once again in 1937 when Dr. Nnamdi Azikiwe a.k.a The Great Zik of Africa launched the West African Pilot which was the first newspaper launched from his stable of the Zik Group of Newspapers. The paper was nationalist in its slant while still maintaining a commercial angle by accepting advertisement from local businessmen and becoming the African representative for the London based Thomson Reuters. It kept the British on their toes and played a major role in wrestling political power and getting the Union Jack lowered down on September 30, 1960.

Since then many newspapers have come and gone with the Tribune which was founded by the late sage, Chief Obafemi Awolowo and is the nation’s oldest surviving paper with the marking of their 70th anniversary late last year.

The media especially the print played a key role in sending the military boys back to the barracks where they rightfully belonged. Guerilla journalism was replicated in the likes of Tell, The News, Tempo magazines etc.

The media still didn’t rest when there was the return to democracy in 1999 as the existing ones did their best to hold the government to account. The new media led to the proliferation of media ‘houses’ as anyone with a wordpress knowledge easily set up a blog in a matter of nano seconds.

The new media came with the blue ocean strategy as it greatly disrupted the traditional media. The audience simply migrated online as most of the news there is free and easy to access as there is no waiting for any vendor or going to the newsstands to meet the horde of street parliamentarians whose robust debates can make top radio shows green with envy.

The advertisers seeing the reach of the new media – Facebook with over a billion users, the same with their acquisitions – Instagram and WhatsApp and Twitter with over four hundred million users alongside Youtube with billions of subscribers and views simply took the majority of their adverts there.

Many traditional media owners were rather slow to respond to the new reality and so were mercilessly left behind to continue to struggle in the highly crowded market.

Many media owners find it a herculean task in meeting their financial obligations to their employees. Many work for months and even years without getting a dime from their employers.

The journalists unions have picketed many of these media houses to no end accusing the employers of being unfair to their members of staff. However, the harsh reality is that the business model they once operated is no longer relevant in the digital age. The proprietor of one of the big traditional media houses was once quoted to have said that ‘his member of staff’s identity card is their meal ticket and they should stop bugging him for the payment of their salaries.’ The era of brown envelope journalism is fast becoming a relic as many of the new media outfits are now fierce competitors for the same fast dwindling brown envelopes as events’ organizers now have more options with which to use from.

The latest revelation by Punch, Television Continental and Aim Group the operators of Nigerian Info, Wazobia, Cool and Arewa FM that they have to cut down the emoluments of their members of staff no thanks to the covid 19 pandemic is a clear pointer to the crisis which will be the post covid reality of the Nigerian media.

It is high time that media owners in Nigeria started thinking of alternative sources of revenue as the advertising model is fast becoming an endangered specie. All over the world, advertising has shifted from the hitherto media giants like the New York Times, Washington Post etc to the gigantic duo of Google and Facebook who have monopolized the adverts market. The former giants are now exploring the subscription model as a buffer against rapidly dwindling advertising revenue. Some like the Guardian UK who don’t put their news behind a pay wall now explore the reader donations model which our Premium Times is now exploring. Some media houses in the west now invest heavily in real estate as a diversification strategy.

The Nigerian media have to look deeply inwards so that they don’t end up as lap dogs perpetually begging for alms from those who they are supposed to be the watch dog of. There is the need for an introspective look so that they can even become independent of the advertisers as the new media offers an avalanche of exploratory options if only they can take advantage of them.

The new reality of the present times demands for a critical rethinking of the age-long advert dependent strategy that is fast becoming something of the subject of study in the museums.

The time for our media houses to act is now!
Tony Ademiluyi wrote from Lagos and edits www.africanbard.com