German Authorities Make Seizure Of Half Tonne Of Cocaine On Ship 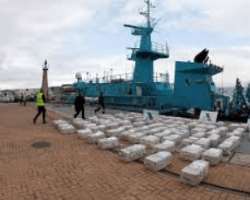 Customs officers have found around 500 kilograms of cocaine on board a bulker that recently arrived in the Port of Hamburg.

The large-scale operation, which lasted several days, ended with an arrest and confiscation of illicit drugs during the past weekend. One of the vessel’s crew members was also arrested, Germany’s Central Customs Authority said.

The ship, flying the flag of Montenegro, has been identified as the 35,000 dwt Handysize bulker Budva. Built in China in 2014, Budva is owned by Montenegrin shipping company Barska Plovidba, VesselsValue’s data shows.

Based on a tip-off received from foreign authorities, investigators targeted the bulk carrier. The ship was sailing from Brazil via England to Hamburg.

Upon entering Dutch waters, the 180-meter-long cargo ship was escorted by the Dutch police and later handed over to German maritime authorities.

Once it reached the Port of Hamburg, police and customs immediately began a search, which resulted in the discovery of cocaine in Budva’s cargo area.

The cocaine was wrapped in waterproof bags. Authorities also found ropes, buoys and a GPS transmitter – smugglers apparently intended to throw the cocaine overboard. The drugs would be later picked up by them or their accomplices.

Additional findings on board the vessel led to the arrest of a suspect among the crew. A 42-year-old man was temporarily arrested and brought before the judge who issued an arrest warrant.

In August last year, authorities in Hamburg also discovered 4.5 tons of cocaine onboard a containership, representing the largest-ever cocaine shipment seized in this country.