Driver connives with friend to kill woman after robbing her 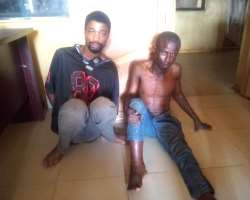 A driver, Olobamoyo Tosin in connivance with his friend, Ogungbemi Gbenga have killed a trader, Mrs Evelyn Ebere after robbing her of her money.

The Police Pubic Relation Officer for Ogun State Police Command, DSP Abimbola Oyeyemi on Tuesday, told The Nigerian Voice that the suspects were arrested by police detectives over the death of the woman.

He said their arrest followed the sudden disappearance of the victim on the 10th of March 2020 as a result of which she was reported missing.

According to him "The case was transferred to anti kidnapping unit with a matching order from the Commissioner of Police to unravel the mystery behind the sudden disappearance of the woman.

"In compliance with the CP’s directive, the officer in charge of anti kidnapping unit CSP Shobiyi Oluwatosin swung into action with his men.

"They embarked on intelligence and technical based investigation which led to the arrest of the two suspects in different locations.

"On interrogation, Ogunbemi Gbenga informed the detectives that he is a driver of a Toyota Carina car with registration number AGD 107 GU with which he carried the victim on charter to Ire-Ekiti where she intended to buy twenty six kegs of palm oil."

Gbenga stated further that he was accompanied by his friend Olibayomo Tosin on the journey.

According to the suspect, While on the road, they both decided to rob the woman of the money she wanted to use in purchasing the palm oil, consequent upon which they drove her into the bush along Shagamu-Benin expressway where they dispossessed her of #400,000.

"Since the deceased knew them very well, they decided to kill her and dumped her corpse in the bush.

"The remains of the victim have been recovered in the bush along Shagamu-Benin expressway and have been deposited at the general hospital morgue for autopsy", the PPRO said.

The Commissioner of Police in the state, CP Kenneth Ebrimson ordered that the suspects be arraigned in court after investigation.

The CP lauded the anti-kidnapping team for their painstaking and intelligence based investigation.