Main Reasons Why June 12, 1993 Presidential Election Was Cancelled By Babangida 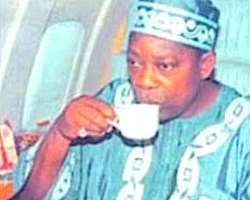 1. Abiola offended Yaradua for by winning the SDP presidential primary. Yaradua did not hide his ambition to rule Nigeria and even before Babangida lifted the ban on formation of political parties, Yaradua already had a very strong political outfit called Popular Front which contained almost all the top politicians in the country then and all the upcoming politicians. Even when Babangida banned in 1987 all Nigerians who had held political or military posts in Nigeria from 1960 to 1983 (this move by Babangida was widely interpreted as being made to prevent Awolowo from contesting yet again, though Babangida personally told Professor Omo Omoruyi that he created that law to prevent Yaradua from ruling Nigeria because Yaradua would only rule Nigeria over Babangida's dead body. Awolowo himself believed that the rule was created against him, and the wrong notion contributed to the heart attack that killed Awolowo in the same 1987), Yaradua was sure that any of his own protege in Popular Front would still emerge as president. When Babangida created SDP and NRC, all the Yaradua's Popular Front politicians registered into SDP and SDP effectively became a Yaradua party much to the dismay of Babangida. When Abiola eventually joined SDP to become presidential candidate, many Yaradua boys in SDP saw Abiola as a joke but surprisingly Abiola won the primaries over Yaradua's candidates. This made Babangida happy because Yaradua had been humiliated in his own SDP by Abiola but the development made Yaradua very alarmed because Abiola completely humiliated him in his own SDP. To find a way forward, Yaradua insisted that he must choose Abiola's vice presidential candidate and that candidate must be his (Yaradua's) boy named Atiku Abubakar. On the other hand, Babangida insisted that he (Babangida) must choose the vice presidential candidate of Abiola and that person must be a Babangida boy named Pascal Bafyau who was then a labour leader. Abiola instead brazenly shunned the two powerful men (Yaradua and Babangida) and their candidates (Atiku and Bafyau respectively) and picked his own candidate Babagana Kingibe (who was then the SDP chairman). This act further humiliated Yaradua despite all the effort and all the money he had expended in creating a solid base in SDP and it made Yaradua promise to find all ways to sabotage Abiola. Babangida was even more alarmed by this Abiola's perfidy and saw Abiola as a dangerous element whose words can never be trusted hence his resolve to make sure Abiola would never rule Nigeria

2. Abiola's private sexual decisions worked against him. Abiola once visited a Yoruba king in his palace on a courtesy visit and few weeks later, Abiola was rumoured to be privately having sex with one of the selfsame Yoruba king's wives. The particular king eventually decided to politely confront Abiola about the rumour. Abiola not only grew angry to the level of confirming his sexual relationship with that king's wife, Abiola additionally threatened the king that he would snatch the woman from him and marry her. To everybody's chagrin, Abiola indeed used a lot of money to induce the woman to officially divorce the king and re-marry him (Abiola). This reckless act of Abiola shocked many Nigerians and particularly alarmed the top members of Nigerian military because Abiola was automatically seen as a power-drunk dollar billionaire who was using his billions to cause disaffection by snatching people's wives and who would do worse than snatching people's wives if he became Nigerian ruler so it was decided that Abiola must never be made a Nigerian ruler

4. As at the time of the June 12, 1993 Nigerian Presidential Election, the Federal Government of Nigeria owed Abiola hundreds of millions of dollars for supplying the government communication equipments, fertilizer, etc. It was reasoned out that if sworn in as Nigerian ruler, Abiola would first use the Nigerian treasury to pay himself (at the expense of national development) all the debt owed him by the Federal Government of Nigeria so it made sense to prevent him from being Nigerian ruler due to this conflict of interest

5. There were many Yoruba kings and chiefs who were strictly against the idea of Abiola becoming Nigerian ruler. Many of these kings and chiefs were not comfortable with the way Abiola used to flaunt his wealth to remind them that they were kings and chiefs in their palaces and domains only while he could use his financial wealth running into billions of dollars to negotiate just about anything from top chieftaincy titles in Yorubaland to removing governments by sponsoring coups d'etat (Abiola was so rich to the level of paying for the coup that removed Shagari in 1983, paying for the coup that removed Buhari in 1985, paying for the coup that removed Shonekan in 1993, paying for the uprising that finally removed Obote from Uganda in the 1980s, and he was known to have donated huge sums of money to the struggle against apartheid in South Africa). Abiola's financial inducement of the wife of a Yoruba king to divorce the selfsame king and re-marry Abiola was particularly appalling and alarming to the Yoruba kings and they went in a group to tell Babangida not to allow Abiola become Nigerian ruler.

In other words, Abiola carelessly offended almost everybody he could not afford to offend. Abiola cunningly but unnecessarily offended the powerful Yaradua who was the _de facto_ owner of SDP by humiliating Yaradua in his own SDP, Abiola alarmingly but needlessly offended the authority of Babangida by rejecting Babangida's suggestion of Pascal Bafyau as his (Abiola's) vice presidential candidate, Abiola brazenly but tactlessly offended all senior Nigerian military men by threatening to retire them, and Abiola flagrantly but thoughtlessly offended groups of Yoruba kings and chiefs by his private sexual shenanigans. All these combined to make the Federal Government of Nigeria directly cancelled Abiola's June 12, 1993 Presidential Election mandate