is Gov. Hope Truly A Leader With A Soul? 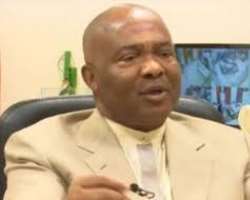 The soul, yes, I mean the soul. No one in the world of matter, energy, space and time can plunge deeply into the realm of the soul without wise guides.

Years of lone wolf exploration of philosophy, mythology, religion, poetry, literature, art and music went into the creation of so many volumes on the soul. Yes to fathom the unfathomable soul we immediately plunge into mysteries.

According to the Greek philosopher Diogenes, it was Xenophanes who first equated breath with soul, using the word psyche with its colourful associations of coolness, bellows and butterfly. Twenty three centuries later, in 1828, Charles Nodier wrote in Paris “The different names for the soul, among nearly all peoples are just so many breath variations and onomatopoeic expression for breathing”.

Psyche, animatman, Savira, Semangat, nephesh, otachuk, loakal, tunzi, prana, duk and geist are sacred words used by primal peoples the world over for the surge of life itself, linguistic cousins of what was called Savol in Old English, Sawal by the Anglo-Saxons, Sala by the Icelandic folk, and eventually as if stone-polished by the ages, what we now call soul.

With the Greek philosophers, soul is identified with the life principle itself, and again, the source and motivation of movement. What moves lives, what lives move. For Aristotle we learn from a passage from De Anima, soul was the “essential whatness” or “essential character”. Analogously, among traditional people soul is commonly regarded as the fundamental sacred essence, that wellspring of the eternal element in human beings.

The conception of the soul as breath may be followed up through Semitic and Aryan etymology, and thus into the main streams of the philosophy of the world. Hebrew shows nephesh “breath” passing into all the meanings of life, soul, mind, animal, while ruach and neshamah make the like translation from “breath” to “spirit” and to these the Arabic “nefs” and ruh correspond. The same is the history of Sanskrit “atman” and “prana”, of Greek psyche and pneuma, of Latin animus, anima, spiritus.

The Slavonic duch has developed the meaning of breath into that of soul or spirit and the dialects of the Gypsies have this word duk with the meaning of breath, spirit, ghost, whether these pariahs brought the word India as part of their inheritance of Aryan speech, or whether they adopted it in their migration across Salvonic lands depends on further research.

Man is composed of three independent kind of material: spirit soul and body. The body is the “world-consciousness”, the soul could be called “self consciousness” and the spirit is the “God consciousness”. There are five organs in the body which afford man the five senses. The physical body enables man to communicate with the physical world. The soul includes that part known as man’s intellect, which helps to make man’s existence possible. The part of love generates affections towards other human being. The soul is the seat of affection.

The soul can be stimulated, and it can be disquieted (Ps. 42:5). It can feel sorrowful (matt26:38). The soul is everything that the personality entails. The soul is the source of the personality, man’s judgment, intellect, and love all are of the soul. Man is absolutely unique in creation possessing higher powers than any animal. The soul of man can be called the mind in this context. It is the soul-mind that generates the conduct of man characterized by desire; will, motive, and intention. Morality which is the yard-stick that measures our actions is the function of the soul-mind.

Anyone without a soul is someone whose actions are bereft of love. One whose conscience is dead, one whose actions are always blame worthy. Such a person is constantly under the influence of negative forces of darkness and his body, soul- (if he has any), and spirit become a play ground for demonic experiment. I think this is where some of our evil leaders find themselves, those who lead without passion and care. The human soul likely has three major components-our mind, will, and emotions. Our will gives us ability to make choices; through a very complex way, our mind, our will and emotions are connected to the body through our endocrine, nervous and immune systems.

So many of our leaders use their will power to fight against those that elected them into different offices as a result, the masses suffer untold hardship due to over use of ill-will against the led. I am not speaking against anyone rather what I am saying is the divine endowed us with will power and the essence of same is for the betterment of our world. Evil leaders create artificial scarcity while manipulating the public funds to their selfish interest.

We acknowledge the fact that following the outbreak of Corona-virus there will certainly be serious global economic recession; other countries of the world are working out their own modalities of solving their problems. In Nigeria, the economic situation keeps getting worse. The societal needs and expectations are mounting higher. Serious minded leaders should show us that they have souls; leaders with souls are resolute in making impacts. In Imo state, the situation is speaking volume. The State governor is doing his best in making sure that Imolites do not feel the scourge of the Corona-virus pandemic.

One of the things Gov. Uzodinma has going for him is the fact that people love him because he is kindhearted. He has a soul and his soul is that of emotion and his emotion is that of love for everyone. He is not a man that loves consumption of wealth all alone. Gov. Uzodinma is not evil hearted but he needs direction so that he will not miss the cardinal points of his administration. Some people have alleged that he was imposed by the Supreme Court to dance the tone of northern music in Imo. This in my own opinion is a complete aberration and negation to the emotional nature of Distinguished Senator Hope Uzodinma to humanity.

I shall strongly oppose Gov. Hope if he does any of the above, but the man I know cannot change overnight and he does, many of us will rise in opposition against him. For now, he is fair to all. He is not the governor of APC alone, he is the governor of Imo people and shall remain so to 2023 or more. We should support and encourage him so that we all will have a better Imo.

Leadership is a task for those who chose to follow the path. We should begin to pray God to begin to create a new soul in the life of our leaders to enable them lead with passion and love for this is the secret behind the divined of democracy.