COVID 19: NSCDC disowns acclaimed official, says he is an impersonator. 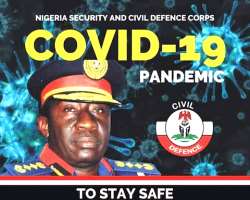 The Nigeria Security and Civil Defence Corps (NSCDC) has disowned an Ebonyi indigene who was parading himself as a staff of Corps, saying it has no record of him as an officer.

“I further state that the said name “Mbam James” is not contained in the database of the Corps and I am unable to provide any information on him.

“The attention of the Corps has been called to a report on section of media that the Ebonyi State Neighbourhood Security Watch has arrested one Mr. Mbam James who claimed to be a personnel of the Nigeria Security and Civil Defence Corps (NSCDC) attached to Orumba Umunze in Anambra State and 2 other passenger he smuggled into the State with his motorcycle.

The Corps appreciated the members of the Ebonyi State Neighbourhood Security Watch for accosting and eventually arresting the impersonator Mbam James who was carrying two persons on his motorcycle coming to Abakaliki and was arrested at Timber Shade axis of Afikpo North Local Government Area, of the state.

It was reported that; Mbam James was flagged down by members of Ebonyi State Neighbourhood Security Watch and he was asked to identify himself, which he could not provide Identity card nor Curfew/Movement/Emergency Pass, when contacted about the development, the Commandant of the Nigeria Security and Civil Defence Corps in the state, Lucy Samu, said she has no record of Mbam James and declared him impersonator.

“However, we wish to place on record that the said Mr. Mbam James from all available records is not a staff of Nigeria Security and Civil Defence Corps.

Civil Defence under the able leadership of the Commandant General Abdullahi Gana Muhammadu is noted for discipline and exemplary behaviour with adequate machinery to check excesses and abuses.

We therefore always inculcate in staff at all times the necessity to follow the laid down rules and regulation while on official duties and even on private engagements.

Therefore, on hearing the report, the Commandant General Abdullahi Gana Muhammadu, a disciplinarian, who has zero tolerance for indiscipline, ordered investigation into the case.

Throughout this period of move restriction, all staffs including those on escort duties traveling inter-states must notify their state Commandants and obtain a ‘permit’ to travel between states in the country; Gana Said.

While the investigation is on-going, it should be noted that the suspect shall be prosecuted in the court of law immediately he lives withholding centre in Ebonyi where is been quarantined and expected to be tested for COVID-19.

“The Commandant General wishes to use this opportunity to enjoin all Nigerians to cooperate with the Corps and indeed all other security agencies by giving credible information that will assist in the identification and eventual arrest of the criminals in any part of our beloved country,”.