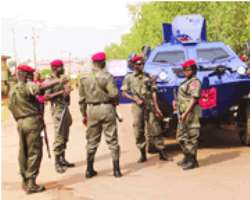 Kidnappers of the Vice Chancellor of Veritas Catholic University in Abia State, Rev Fr Justin Ukpong, have insisted on a ransom of six million naira or they will kill the ailing cleric.

The abductors of the VC, who exhibited a devil-may-care attitude when they spoke on the telephone with Sunday Sun, maintained that the Catholic priest would not be released except the ransom was paid.

The daredevil kidnappers in Abia State had on Thursday evening sent shockwaves across the South East and the Catholic community in the country when they seized the vice chancellor in Aba.

Apparently, the incident caught soldiers just deployed in the South East napping as his abduction came a few days after the Federal Government deployed soldiers in the region to stem the rising trend of kidnapping.

Speaking with our correspondent on the telephone on Friday evening after a call was put through to Rev Fr Ukpong's mobile line, the kidnappers warned that the man of God was seriously ill and that it would be in his own interest if the ransom was paid as soon as possible.

When the kidnappers handed the phone over to the VC's driver, who was kidnapped alongside him, he corroborated the kidnappers' warning, saying that Fr Ukpong's health condition was very critical.

'My oga is seriously ill. He is on drugs and he needs to take his drugs every 30 minutes. Please, who am I speaking with?'

Also speaking to our correspondent, the cleric, who also wanted to know who he was speaking with, faintly said: 'Please, you should go to the university and meet Kalu, who is coordinating…'

He did not finish the statement before the line went off. In a text message sent to one of our correspondents, the Bishop of the Abuja Catholic Diocese, Archbishop John Onaiyekan, alerted that Ukpong's abductors had issued several threats using the VC's phone.

He urged Nigerians and the Catholic community to pray for his release.

'Kidnappers have abducted Rev Fr Justin Ukpong, the Vice Chancellor of our Veritas Catholic University in Abia State. Please pray for his quick release. They are threatening us on (Fr Justin's) phone no. 08029303064.

'The police at the highest level have been informed. You might bombard them with calls to let Fr. Ukpong go for God's sake,' the text message by Onaiyekan read.

Speaking to Sunday Sun on the telephone, the Public Relations Officer of the university, Mr Onuoha Emeaba, said the VC was abducted on Thursday about 6.45pm. Emeaba added that they had contacted the kidnappers and pleaded with them to release Ukpong because 'he is a man of God.'

'However, the army will do its best as we have done in the last few days to free some kidnapped victims. The information has been passed to the formation in the area and we will do our best,' Olukolade said.

The Abia State Police Public Relations Officer, ASP Ali Okechukwu, however, said they were already on the trail of the kidnappers.

'I think we will stumble into something very soon. If you can call me back in an hour's time, I can be more specific because we have been busy with recruitment exercise,' he said in a telephone interview.