Wole Soyinka: Abating The Arrows Of The Envious And The Ignorant. 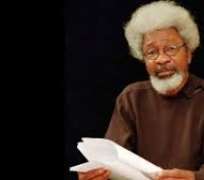 In recent times, Professor Wole Soyinka (WS) has been at the receiving end of arrows from those who hate his guts and his intellect. Those who are discomforted by his achievements. Those who are having nightmares about his pride in his heritage and his aversion for ignorance and incompetence. Those who felt threatened by his solidness and their own destitution. This crowd include the Islamic fundamentalist and irredentist, Adamu Adamu; the hollow-minded mouth piece of misery, Garba Shehu; the mudslinger Mahmud Jega; the contused minded Mohammed Haruna, and discordant Sam Nda-Isaiah.

Each of them had taken turns to attack, insult, abuse and disrespect WS at different times. But the focus of this piece would only be limited to the garish and gaudy guffaw of Adamu Adamu and that sentry of sorrow, Shehu Garba. Please, note that this is not to say that our own WS could not be criticized, no, far from it. He could and should be, just as he could and should be defended when the need arises, as in this case.

After reading the vituperation of the Azere born Adamu Adamu on WS, it was difficult to imagine the putrid level of his envy and inferiority complex. In a shameless advertisement of his own inadequacy and mediocrity, he breast-stroked in balderdash as he oozed with effluvial prejudice. To imagine that he was partly educated at Columbia University, one of the most prestigious institutions in the world, his outburst was an elucidation of crass ignorance, an edification of deodorized gibberish and an irradiation of repulsion to sanity.

In his piece, Adamu Adamu had used his attack on WS as a veil for his unguarded exudation of his hatred for the Yorùbá Nation, its civilization and every glory that the Yorùbá represents. Charging from a mind cocooned in Islamic putridity, Judaist odiousness, he assaulted and derided Yorùbá traditional ways of life, beliefs and culture, using obnoxious words from his colonised mind like "paganism", "heathenism", "idolatrous" among several others.

Accusing WS of "an unfounded cultural superiority complex", he unwittingly showcased the despicability of his own lack of self esteem, absence of belief in self and loathing of his own ancestry. He, with giddy gusto and a howling hollowness, elevated with an obvious redacted self animus, Judaism above Yorubaism. He showed, albeit unwittingly, his own cultural vacuity, absence of originality of cosmological extrapolations in his heritage. What a travesty! And a pity!

Why Adamu is miffed by the pride and delightfulness of WS in his Káãro Oòjíire Cultural grandeur, splendour, dignity and glory is actually a reason for curiosity. Is it because of his perceived worthlessness of his own heritage? Is it because he has nothing of substance to point at as the contributions of his forefathers to civilization? Is Adamu bothered by the aridity in and or parlousness of his own cosmological inheritance?

If this is the case, how is this the fault of WS or the Yorùbá people who are very proud of their own heritage in all ramifications? How and why is WS' pride in his Káãro Oòjíire culture so discomforting to him? Why is he having nightmares about Yorùbá people loving their language, singing in it and dancing to their own Yorùbá songs? If he perceived daftness in his own ancestors and aridity of relevance as well as philosophical substance in what they bequeathed to him, how is that the fault of WS and the Káãro Oòjíire Nation?

Adamu further self immolated by glorifying in the religious imperialism that has victimised his mind and thought process by accusing WS of "a hubristic pagan worldview," suggesting that the faith and belief of WS was unacceptable to his colonised and Islamized mind. By extension, Adamu not only rubbished his own forefathers, he was laboriously engaged in efforts to pull WS' pride, faith and belief in his own ancestors and heritage in the malodorous mud of supercilliousness.

Adamu's edification of Islamic boondoggle and rubbishing of Yorùbá beliefs was an attestation to the power and impact of religious imperialism. An imperialism that has derobed him mentally and cinctured his thinking process. His shackled mind marinates in poisoned pool of peonage and obsequiousness to Judaism and Islamism. That his piece was an expression of cultural inferiority garbed in truculent and tortured inability to discover self worth was self evident.

Inspired by the bitterness engendered by his self-emptiness, Adamu foolishly claimed that the Káãro Oòjíire's tradition and culture "is for a world that is past and gone - and better forgotten." What an arrogance of ignorance! What a mendacious insolence! Someone should educate him that among many cultures/faiths that have spread beyond their immediate environment of origin without any use of force, without any shedding of blood, but only on the strength of their substance and relevance is the Yorùbá culture/faith that is now practiced on several continents.

Could Adamu say the same of his Judaism inspired Islam? A faith, which he adopted for lack of substantive bequeathment from his daft ancestors, and which has been an omen of woes, portent of tears and harbinger of tragedies to humanity for several centuries? A faith that has inflicted untold hardship, suffering and destruction on civilization through endless Jihads, hitching and hobbling our humanity with its spread of undiluted hatred and consecrated distrust. Yet, in his unrestrained exudation of inanities and glowing display of Intellectual charlatanism, Adamu was elevating such a rabid nonsense over and above Yorùbá's philosophy of life that edifies and glorifies humanity!

Calling Yoruba Ifa divinations a "mumbo jumbo", words that denote "meaninglessness", I dare to ask Adamu Adamu and his fellow travelers in Islamic terrorism, the value of their Qurannic claptraps, gobbledygook, hocus-pocus and obscurantism? A faith that advocates the subversion of womanhood and suppression of intellect, freedom and liberty of others. Without violence, Islam would not have gone anywhere because of its evidential emptiness as compared to Ifa Olókun a s'òrò d'ayò, of Káárò Oòjíire that is obviously more substantive. That is the attestation of History.

But for Adamu and his fellow myopic travelers, History is of no use. History is not relevant. History belongs in a garbage. As a Minister of Education, he had no qualms spearheading a policy that sought to eradicate the teaching of History in all High Schools across the Country, before he was vehemently opposed and stared down. Because he had no History, he was trying to deprive others who have History. Adamu's Arabised and Islamized mind was shrouded from all Africanness and his own History, his own own roots, his heritage, if he had any.

Like a headless body, Adamu, has been sauntering around the corridors of power in Nigeria, stumbling and bumbling, igniting ignorance. His mission was to titillate the country with a tapestry of tinted and tainted truth draped in dumbness, denseness and darkness. He wanted to turn the children into goats without any affinity with and to their past simply because he has none. He has no problem with Arabic Studies but his aversion to History has become legendary.

If Adamu was in misery and agony over the emptiness of his own culture and vacuity of what was bequeathed to him, he should do more research into History. Hopefully, he would be better instructed and able to stop his slavish adoration of Arabism and Islamism. If he is unable to find anything noteworthy or edifying to his ancestors, that would be his own cup of tea. He should not expect our own WS, to manifest the same symptoms of nihility and boorish blankness.

The fact that the Yorùbá people are very tolerant of different faiths in their milieu should not be construed as a licence to attack, ridicule and deride their traditional faiths, their cultural beliefs and their ways of life. Live and let live. Let WS practiclse his faith. Allow us to practice our traditional faiths as we desire. Let the Yorùbá speak their language. Allow us to sing our songs in our language and dance to them as we like. Again, live and let live. Someone needs to educate Adamu Adamu on the value of that precept.

As to Garba Shehu, who by my own definition, is a sentry of sorrow, and who had derided WS as not being a "medical professor" and only a writer, he (Shehu) is a product of an impudent Northern elite, bitter about their civilised confusion and the contusion of and in their civilization. He has no idea whether he is an Arab or an African. Like Adamu Adamu, he has no clear identity. Their Arabised minds detest anything and everything authentically African. They think they are free when indeed, they are in chains.

Thus, when they encounter a personality like WS imbued with innate self-esteem and confidence, with a definite, concrete, identifiable identity, they become jittery, envious, defensive and belligerent. In their belligerence, they become uncoordinated and act as well as speak incoherently, becoming discourteous and discombobulated. Since Shehu and Adamu are unable to fathom the nature of interventions by WS in the contraption called Nigeria and in obliviousness, all they could do was to drag down something that is far above their heads.

Delving into the "qualifications" of WS as being in "English Literature" was very gratuitous and deliberately aimed at diminishing a distinguished person and his accomplishments. One hoped that Shehu would follow up his description of WS' qualifications by telling us that of his certificateless principal, Mohammed Buhari, in politics and administration. This, using his myopic criteria, would have help the rest of us to justify the travesty of their presidency.

With their hateful and envious minds against WS and his deep affinity with his Yorùbá roots, it is evident that they are thoroughly agonised by a vacuous past of their forebears. WS is not to be blamed for that. The Yorùbá people are not to be blamed for that. And neither could anyone change History of a great civilization like that of Káárò o jìíre. History never dies and the truth is always constant.