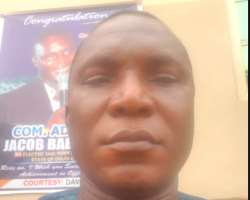 The Chairman, Nigeria Labour Congress (NLC), Osun State, Comrade Jacob Babatunde Adekomi has lamented that workers and pensioners in the state were suffering due to heavy debt profile of the state.

Adekomi said this in his May Day message made available to our The Nigerian Voce.

He said the May Day worldwide is always an occasion for celebrating workers, objective stocktaking, pomp and pageantry with drums rolled out but this was not possible this year.

He said it was not the best of times for workers in Osun and that the ravaging COVID19 pandemic also compounded the problems.

"Some of the difficulties we have been facing for the past years in the State include 15 months of unpaid salary and pension arrears left by the immediate past administration which amounted to Sixty Billion Naira (N60B) for both State and Local Government Workers.

"Also, the non monetization of promotion of workers between 2012 and 2018 as released to workers after the promotion exercise carried out in 2018 and the workers that retired on contributory pension scheme since 2016 had not been able to access their pension which they toiled for, and that totalled over Twenty Billion Naira (N20B) for both accrual and contribution", Adekomi said.

He said workers in active service faced a future that looks bleak as their monthly pension deductions are not fully remitted to their Pension Fund Managers (PFAs).

He also lamented that the year 2012 gratuity of Pensioners of about Six Billion Naira (N6B) is still outstanding in year 2020.

He also said non-payment of four months outstanding deductions from the salaries of workers have negatively affected their remittances to their various Cooperative Societies, Bank Loan repayment, Union dues.

He said "This has invariably impacted the welfare of the workers negatively by preventing them from meeting their domestic and personal responsibilities.

Adekomi frowned that while workers in other states of the federation are already enjoying the new minimum wage, Osun State is yet to conclude on the mode of implementation. "The Committee that was set up to midwife the payment of New Minimum Wage was about concluding its assignment when the problem of Covid-19 pandemic broke out."

The NLC Chairman commended the workers for their doggedness, perseverance, endurance and longsuffering in the face of these unfavourable circumstances.

He said "We in the leadership position are pained as you are pained and I will like to inform you all that we are doing everything humanly possible to ameliorate this ugly situation. We are always engaging the present administration on how to tackle these myriad of problems as a way of moving forward."

He called on the state government to put machinery in motion to urgently address the problems facing workers in the state so that the harmonious relationship between the state Government and workers and the pensioners will not be jeopardised and lead to industrial disharmony and unrest.

He said "Dear Comrades, as we confront this ravaging pandemic, I will like to encourage you to stay safe and keep following the World Health Organisation (WHO) and Nigeria Centre for Disease Control (NCDC) protocols for safety, both at home and in our various working environment. I

"I am very optimistic that our Nation and the entire world will soon find a cure to the deadly virus. Also, let us keep obeying the instructions and directives already issued and that will be issued from time to time by the Government, both State and Federal. Aisan ko ni fi ile wa se ibugbe oo. Amin.

Adekomi expressed appreciation to Governor Gboyega Oyetola for the prompt payment of full salaries and pensions since inception of his administration. He urged the governor to continue to sustain and improve upon this, saying it is a radical departure from the past.

He said "The colossal debt profile of the State which is presently put conservatively at over Two Hundred and Seventy Billion Naira (N270B) is frightening and mind boggling and the mode of deduction is very unfriendly."

"The Federal Government is therefore implored to have a second look at the mode of deduction which stand at over 2.4 Billion Naira on a monthly basis, so that the State will not go into bankruptcy.

"The ingenuity and financial sagacity of the State Government under the able leadership of Governor, Gboyega Oyetola must be brought to bear to create new opportunities to alleviate the hard time currently being experienced by workers and pensioners alike, so that at a time like this, the next season we shall be able to say ‘uhuru’.

Adekomi said the current administration deserves praise for being proactive in handling the ravaging pandemic (Covid-19) in the State which had been responsible for the low spread and low mortality recorded till date.

The labour leader also lauded the health workers in the front line of the battle against Coronavirus for their sacrifice. He said "Our health workers are also appreciated for laying down their lives to stem the tide of this pandemic."

He urged government to step up the fight against the pandemic. "I wish to enjoin the State Committee on Covid-19 ably led by His Excellency, the Deputy Governor to intensify efforts at combating and containing the spread of the deadly virus in the State", Adekomi said.