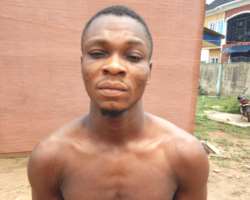 A 28-year-old man, Godday Robinson has been arrested by men of Ogun State Police Command for allegedly raping, robbing and attempted to kill a 17-year-old girl

The Nigerian Voice gathered today that the suspect dumped the girl in a 10 feet deep septic tank in the bush when the lady fainted.

A good Samaritan in the area who sighted the lady lying unconscious raised an alarm and the matter to Agbara Police Area Commander and the policemen were detailed to the scene.

The young lady was evacuated by policemen with the help of members of the community and she was quickly taken to a nearby hospital.

Having regained her consciousness, the victim explained to the police that on the 22nd of April, while she was coming from night duty which she performed in the company where she works, the suspect who has been making advances to her before accosted her, capitalized on the isolated nature of the area and dragged her into the bush where he forcefully raped her, dispossessed her of her Galaxy Samsung phone valued at N85,000 and then strangled her until she passed out momentarily.

The Police Public Relations Officer for the command, DSP Abimbola Oyeyemi confirmed the incident to The Nigerian Voice.

The PPRO said the man thought the girl was dead, he dragged her further into the bush and dumped her inside the septic tank.

"After sometime, she came back to life and started shouting for help and her cry attracted someone who raised alarm to people in the area", the police spokesperson said.

He added " it was on the strength of her explanation that the area Commander ACP Bolanle Muritala gave a matching order to his detectives that the suspect must be traced and apprehended."

"The detectives swung to action immediately, traced the suspect and got him arrested"

"On interrogation, the suspect made a confessional statement and owned up to the commission of the crime but blamed it on the devil", Oyeyemi said.

The Commissioner of Police in the state, CP Kenneth Ebrimson ordered the immediate transfer of the suspect to state criminal investigation and intelligence department for further investigation and prosecution.