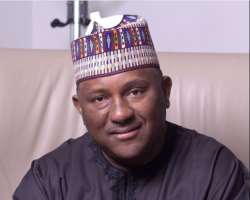 April 29, 2020: LAGOS, NIGERIA - BUA Foundation, the philanthropic arm of BUA Group today, announced that it has released N300million to the presidential task force on Covid-19 to aid logistics and the operations of the taskforce in line with the earlier pledge of Founder/Chairman, Abdul Samad Rabiu.

The BUA Foundation also announced that it has released the cash sums of N600million to the following states today: N100million each to Kwara, Kaduna, Ekiti, Rivers, and a sum of N200million to Lagos State - distinct from the 1billion health infrastructure intervention grant being provided to equip a permanent health facility in Lagos.

These new contributions are also in addition to BUA’s earlier disbursement of 1billion Naira to the CACOVID Private Sector Coalition, and 100million Naira each to Sokoto, Ogun and Edo States as BUA continues to champion the fight against the virus in Nigeria.

In his comments, Abdul Samad Rabiu said that it was important that Private Sector steps in to support the country where possible in combating the virus and its attendant effects.

Also speaking on the announced N3billion Health Infrastructure Intervention Grant for Kano and Lagos States, Abdul Samad said, “BUA Foundation is already working closely with the Presidential Task Force, NCDC and other stakeholders on how best to deploy these funds to immediately equip the selected facilities in Kano especially and Lagos within the next few weeks. "These grants will be disbursed and monitored in line with globally accepted best practice”, He added.

Speaking further, Abdul Samad Rabiu said BUA will continue to monitor the situation and is ready to do more to support areas that are in need. “We need each other to come together in fighting this virus.”, he said.