Shehu of Bama is Dead 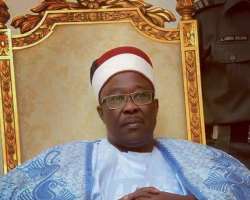 The cause of death is still unknown as an official Statement from the the Family or University of Maiduguri Teaching Hospital (UMTH) and Borno State Ministry of Emirate Affairs is being awaited as th tradition demands.

Similarly, information on the burial arrangement of the royal father is being awaited from the family as at the time of filing this report.

Meanwhile, Borno State Government has confirmed the death of His Highness, the Shehu of Bama, Kyari Ibn Umar Elkanemi who passed on Monday afternoon in Maiduguri. He died in his mid-60s.

Jato said the Shehu was known to have been battling with protracted illness as many people of his age, often deal with.

The Commissioner said the Shehu’s palace will announce funeral arrangements that will be communicated to members of the public.

Jato said the State Government stands with the Royal family and the people of Bama, the state’s council of chiefs and entire people of the state in this grieving period.