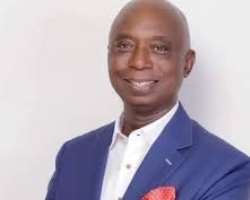 The Prominent Civil Rights Advocacy group HUMAN RIGHTS WRITERS ASSOCIATION OF NIGERIA (HURIWA) has tasked the suspects from the agrarian Delta State community of IDUMUJE UGBOKO being arraigned in the Federal High court Abuja division over terrorism charges by the office of the Nigerian Attorney General and minister of justice Alhaji Abubakar Malami Malami(SAN) to put up strong defence instead of dissipating energy on engaging in smear campaign against the renowned Philanthropist from their homeland Prince Ned Nwoko over their ordeals.

HURIWA recalled that a statement issued by Comrade Salihu Isah, the Special Adviser (as he then was) to the Attorney General of the Federation, Abubakar Malami, SAN said the Federal Government following investigations into the case had decided to file the charges against the accused persons for violating the nation’s anti-terrorism laws. He said that they are to be arraigned before Justice O.E Abang of the Federal High Court, Abuja. The nine others charged with prince Nonso Nwoko were Dennis Uwadiegum Nwoko, Ndudi Chijiume, Nwochie Agiliga Light, Raymond Omosiete, Adim Nwafor, Okey Ifejoku, Azuka Mukolu, Omoye Esonye and Aikhomo Omezi.

HURIWA recalled that the Principal State Counsel, Mr. Magaji Labaran of the nation’s Department of Public Prosecution, Federal Ministry of Justice alleged that one of the culprits, Ejimofe Nwoko between May 18-25, 2017 at Idumuje-Ugboko in Delta state conspired with the ten others to commit an act of terrorism punishable under Section 17 of the Terrorism (Prevention) Amendment Act, 2013. They were specifically alleged to have committed act of terrorism by burning houses belonging to members of the community among whom were Chukwuma Nwoko, Chief Chris Ugwu, Victor Omezi, Peter Bama, Nwoko Kachido and killed Cyprian Kumaorun within the community amongst others as the Court will decide in series of open hearing sessions.

The Prominent Civil Rights Advocacy group HUMAN RIGHTS WRITERS ASSOCIATION OF NIGERIA HURIWA affirmed that from public records, it obtained from the Court, four of the defendants were arrested between November last year and February this year. 6 are still on the run. They were arrested on court bench warrant and are being held at Kuje prison.

HURIWA affirmed that one of the victims of the alleged act of terrorism was Chuks Kennedy who allegedly later died from his severe injuries. His wife who was 6 months pregnant at the time was severely beaten and allegedly taken to the palace for the pleasure of Nonso Nwoko.

HURIWA in the media Statement issued after an emergency session of the top management of the body in Abuja disclosed that her attention was called to the vexatious allegations made by one Azuka Jebose who pointedly linked the Nigerian Prominent statesman Prince Ned Nwoko with the arraignment of the accused persons from IDUMUJE UGBOKO.

HURIWA maintained that in the real sense of it the group recalled that over a dozen petitioners had about two years ago sent a save our soul message to the HUMAN RIGHTS WRITERS ASSOCIATION OF NIGERIA (HURIWA) over cases of human rights violations they suffered in the hands of the aforementioned accused persons, allegations that were then forwarded to the National Human Rights commission of Nigeria which investigated the claims alongside with the Nigerian Police Force after which a recommendation was made to the office of the Federal Attorney General and minister of justice Alhaji Abubakar Malami (SAN) who in turn in his considered wisdom decided to bring up charges of terrorism against the accused with a view to sanctioning offenders who reportedly unleashed venomous violence on the IDUMUJE UGBOKO community of Delta State.

HURIWA recalled that Terrorism and insecurity are twin evils which have bedeviled the Nigerian State for high on now. Although the term “terrorism” has poses legal definition challenge, its peculiar characteristics manifest in motive founded on ideology, identifiable by signature violence and targets primarily intended to compel compliance.

HURIWA said that: "In the wake of the 9/11 terrorist attacks in the USA, the United Nations Security Council (UNSC) passed Resolution 1373 which required member states to make not only terrorism a serious crime in domestic legislation along with terrorists funding and but also other ancillary offences. The first direct attempt at tackling the problem was included in some sections of the EFCC (Establishment) Act 2004. comprehensive Terrorism Bill was proposed at the National Assembly 2005 but did not pass into law. However, the situation changed with the passage of the Terrorism Prevention Act of 2011 which was amended in 2013 (referred herein as TPA)."

"Be that as it may, the problem of Nigeria is not the lack of applicable laws in the different spheres but lack of proper or outright non-implementation. This is so much a norm that it is said our laws are better observed in breach. Government and the public cannot be on different levels of operation and expect to have a sane society, more so that the twin evils of terror and insecurity are largely by products of people-government interaction and to a large extent a measure of the state of health of the relationship. This makes this discourse a most relevant one at this time of our national life."

HURIWA has therefore faulted the wild allegations against the industrialist Prince Ned Nwoko on the decision of the Federal Attorney General and minister of justice Alhaji Abubakar Malami(SAN) to arraign the suspects from IDUMUJE UGBOKO over charges of terrorism.

HURIWA reminded those waging the campaign of calumny against the Philanthropist from Delta State that they owe an obligation to Nigeria to support the war on terror and in the case that government decided to charge any citizen for terror related offences, the best that can be done by the supporters of such people is not to look for somebody to blame but to provide the best legal assistance they can muster to defend their friends who are charged by Nigerian government and not to look for soft target to throw accusations at.

HURIWA then submitted that: "It is in recognition of the need to support the fight against terrorism and promote national security that in the case of Achem v. F.R.N. (2014) LPELR-23202 (CA), the Court of Appeal per EKANEM, JCA at pages 16-17, paras. F-A held thus:

"It should be mentioned that the applicant was convicted and sentenced for offences relating to terrorism which in recent times have grown in intensity and magnitude, and have become a threat to our national security. Courts should therefore be very circumspect in granting bail pending appeal to a person convicted for any offence relating thereto.”

The public must become decisive about terror by not only not supporting terrorists but also being willing to support the war."

"In the same vein the government must engage in a law based war by enforcing anti-terrorism laws. Section 1A (4) of the TPA (as amended) empowers “the law enforcement agencies” to “enforce all laws and regulations on counter–terrorism in Nigeria”. Prior to the TPA, Section 46 of the EFCC Act 2004 defines “terrorism” to mean a violation of the Criminal Code or the Penal Code and with likelihood of endangering life, integrity or freedom, or causing serious injury or death with the intent to force the person(s) or body or government to do or not to do certain things or disrupt and includes financing or aiding terrorism. The punishment for the crime by Section 15 of the EFCC Act is imprisonment for life."

HURIWA reminded those circulating damaging and distorted claims against the self made billionaire Prince Ned Nwoko should note that all around the World the legal dimensions of terror related offences have widened just as the Rights group said only few days back in the United States of America the Justice Department charged two people with federal terrorism offenses for allegedly claiming they were intentionally trying to spread the coronavirus.

The charges, in cases in Texas and Florida, come about two weeks after Deputy Attorney General Jeffrey Rosen instructed federal prosecutors across the U.S. that they could charge people who threaten to spread the coronavirus under the terrorism statutes because the Justice Department considers it a “biological agent” under the law.

“Threats or attempt to use COVID-19 as a weapon against Americans will not be tolerated,” Rosen wrote in the memo to U.S. attorneys and the heads of all Justice Department agencies, including the FBI.

HURIWA recalled that the Prosecutors allege James Jamal Curry, 31, of St. Petersburg, Florida, coughed on an officer’s arm while he was being arrested on a domestic violence charge on March 27 and told the officer, “Well I got the Corona,” according to court documents. He posted a bond and was released from jail the next day before officers were called to his home again — for allegedly violating a court order to stay away from the victim — and placed him under arrest a second time.

HURIWA has also appealed to all the warring parties in IDUMUJE UGBOKO to rally round their Son Prince Ned Nwoko so his aspiration to set up the first of it's kind Sports and Science Specialist University in their community is realized in no time given that the proprietor Prince Ned Nwoko had conceded forty percent of ownership to IDUMUJE UGBOKO community which will make the agrarian and tourism hotbed the first community in Africa to jointly owned a standard University that will be profitable and beneficial to the community as a whole.