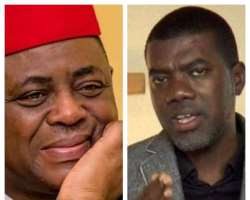 “Mallam Abba Kyari is dead. If you cannot say something good about him, please QUARANTINE your mouth!” - Reno Omokri

So you have the right to air your own opinion but want others’ mouths shut?

Really? If you have been painting this government as evil, yet you still see a man who served under this evil as “a good man: a man of honor”?

Please if Nigerians must take you serious, can you kindly tell us the difference in cruelty and destruction between the devil and his servant?

Reno Omokri and Femi Fani-Kayode are typical examples of hypocrisy. These two people are members of the Peoples Democratic Party (PDP). While Omokri was a spokesperson to the former President Goodluck Jonathan, FFK was the Director of Media and Publicity for the Jonathan/Sambo Presidential Campaign Organisation for the 2015 election.

These two personalities have continued to use almost every opportunity they have in public to malign President Buhari and his government. They have called Buhari so many times a failure and consistently maintained that he is the worst president Nigeria has ever had. In some occasions FFK painted the government as evil and with evil agenda to islamize Nigeria. How come they suddenly want Nigerians to see the person who was supposed to have been the facade of that evil, late Abba Kyari as a very good man they almost presented as a saint? And Omokri thinks that he has the right to air his view as it pleases him but asked Nigerians to shut their mouths if they cannot say anything good about Kyari.

Africans have an erroneous culture of not speaking bad of the dead, and it even becomes a taboo if the person is highly placed in the society. I want to assume that FFK and Omokri perhaps spoke from this perspective which they have the right to do, but to say that a chief of staff who served in a government they considered evil was a good man is what I do not find diplomatic enough and could not reasonably comprehend the two colours.

Twist the law and bend the standard so that one can use it when it favours one and reprimand the same law when the truth stands against the same person is synonymous with hypocrites and such people deserve not to be trusted and followed.

FFK and Omokri have shown that they are typical examples of Nigerian politicians who play to the gallery. Nigerians should wake up and stop creating enemies with their relatives and friends in defence of these politicians.

My stand is that no human has the right to judge another, so Father in heaven, the controversy that greeted the death of Abba Kyari on whether he was a good or a bad man is huge and only You alone knows the truth. Please dear God, You are not a partial judge, therefore kindly treat and judge the soul of Abba Kyari and give him whatever he deserves.