Fenrad Welcomes The New Commissioner Of Police To Abia State. 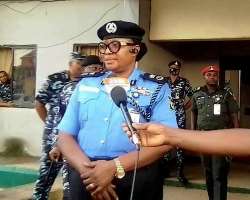 On behalf of Board ofTtrustee and Members of Foundation For Environmental Rights, Advocacy & Development {FENRAD). A foremost Environmental & Human Rights organization in Abia state. Welcome on Board CP Janeth Agbede, New Commissioner of Police.Abia State command

This deployment to God's own state is ideal, timely and opportune given the incidents hitherto before the Inspector General made the official pronouncement. FENRAD wishes Madam Commissioner a peaceful and friendly stay throughout her commissionership.

May your stay be fruitful to Abia and Abians, May your professional touch be positively felt in every nook and cranny of the state as you swing into action to overhaul the security architecture of the police in Abia, and May your motherly empathy and care so radiate at all times as you work assiduously for the protection of lives and property of Abians

It is indeed necessary to have a new CP in Abia, FENRAD believes, that the trust and camaraderie between the police and the citizens will be enhanced. If the recent incidents that resulted in the loss of lives of Abians had not been timely addressed, the police-civil relations would have suffered a great dent. FENRAD urges the new Commissioner to do her duty without fear or favour.

FENRAD reminds Madam Commissioner the task ahead. The road is long for one to go it alone. Policing is civil and security task; requiring the help and cooperation of the civilian population. FENRAD looks forward to working as a Rights group, for the good of the humanity, Abia and even the police.

Once again, FENRAD welcomes Madam Commissioner urging her to improve on the past record and do more.