Covid-19: Benue 'index Case' Is A Prisoner Of Conscience, Free Her Now-: Huriwa To Benue Government; Buhari And Boris Johnson: 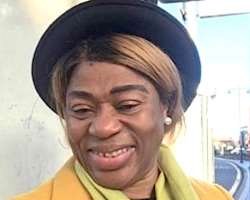 The Prominent Civil Rights Advocacy group HUMAN RIGHTS WRITERS ASSOCIATION OF NIGERIA (HURIWA) has described as a PRISONER OF CONSCIENCE the 54-year old Susan Okpe, who was said to be the Benue index case of Corona Virus just as the Rights group has asked President Muhammadu Buhari; Prime Minister Boris Johnson to intervene so she regains her freedom.

HURIWA recalled that the the said index case in Benue State Susan Okpe had cried out to President Muhammad Buhari of Nigeria and the British Government, to evacuate her from Benue state just as the Governor of Benue State, Dr. Samuel Ortom had on Saturday, 28th March, announced that Mrs. Okpe was the Benue's first recorded case of Corona Virus, also known as COVID-19.

HURIWArecalled that Susan Okpe, a British Nigerian, arrived the country on Saturday, 21st March via Kenya Airway, for the burial of her mother slated to hold early next month even as a family sources told the media that, Mrs. Okpe ran series of tests before leaving the United Kingdom.

HURIWA stated that in a message sent via WhatsApp to our reporters including the HUMAN RIGHTS WRITERS ASSOCIATION OF NIGERIA (HURIWA), Mrs. Okpe appealed to the Federal Government and the UK Government to move her out of Benue State even as she stated in her own words thus: "I have kept my cool, but am now sick with swollen gums, being stooling throughout the night, no nurses or medical attention. My crime is that am a British who came into Nigeria, particularly Benue State; felt feverish, took myself for check up because I have travelled longer than usual.After examinations, I was told by the doctor my temperature was high and I said keep me for observations as I did not experience any before I left London, passed from Lagos to Abuja my temperature was like any other passenger was being monitored by the authorities."

HURIWA stated however that after nearly a Month that the distressed lady made the clarion call which elicited the response of the British embassy including a rash of propaganda masterminded by the Benue State government, it does not appear that this PRISONER OF CONSCIENCE has been freed even when the Benue State government cleared all the persons that reportedly met her on arrival from Great Britain in March just as the Rights group said it was approached by atleast a dozen callers Yesterday requesting that we appeal to the Nigerian government and the British Prime minister to directly intervene and get this citizen of both Nigeria and Great Britain freed from what appears to be enforced disappearance and incarceration.