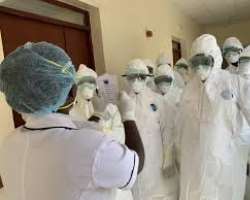 Like a scale out of the eyes, it was incredibly tough to swallow the sad news bite that laid sympathetic on my TV screen on a Wednesday morning." Coronavirus kills 'brilliant' doctor in Nigeria. I immediately recalled one of the reports of the Nigerian Medical Association, the umbrella body of doctors, on how the lack of adequate protective gear, testing kits and slow testing process have put medical staff at risk. Tragically, it was a sexagenaria, the late Dr Emeka Chugbo that we lost to the global ravaging pandemic. May God grant him a deserving repose.

It is no exaggeration that health professionals, anywhere in the world, are regularly exposed to risk, particularly, in the event of an outbreak. Let's travel back to the recent past, we could see vividly the professional and patriotic brilliance of Dr Ameyo Adadevoh - a sheer genius physician who was respected for her handling of the first Ebola case. While she and her team did an excellent job to curtail the spread of Ebola, we, tragically, lost her to the virus. The end of another hero. May she sojourn well to her new world.

About a decade now, it appears our world has changed. From one virus to another. With the outbreak of Lassa fever, many heroes took a bow from this world since they had always been exposed to risks. They fought impressively hard to see Lassa fever patients saved and restored, disturbingly, we lost Dr Philip Dzuana to the pandemic. In the wake of this, the President of the National Association of Resident Doctors, Dr Sokomba tweeted: This morning we lost Dr Philip Dzuana to Lassa fever - he was the sixth doctor to have died of Lassa fever. May their souls rest in peace.

It is, however, sad to note that despite the level of risk exposure that daily confronts health professionals, their welfare and remunerations are a mere shadow compared to their regular workload. According to the WHO, a strong health system has a robust finance structure, well -remunerated and trained workforce, sufficient and highly maintained facilities, logistics for medicines, vaccines and technologies, and reliable and regularly updated health information system. It is believed that in the presence of such, easy access to quality health service will be guaranteed.

Looking back to the health profile of Nigerian leaders and how they have made the tax payers foot their foreign medical bills, one is only left to asking two questions: Is health no longer an investment? Are healthy citizens no longer the greatest asset of a nation? Pitiably, the budgetary allocation to the health sector is a lucid illustration of a government that prioritizes foreign medical trips over the equipment of its own health centres. In the last four years, the budgetary allocation to the health sector has been less than 6%, which is ten times lesser than what the government of South Africa invests in health. As a consequence, life expectancies in both nations have been 53 and 62 accordingly. As a matter of fact, a quick gaze at life expectancy in the UK, makes the matter more interesting and puzzling- 80 years.

To further add to this worries is the sympathetic bed capacity of hospitals which is half a bed for 1,000 people. By extension, in Nigeria, there appears to be less than 1 doctor for every 4,000 Nigerians. Put similarly, Dr Chris Akani, a Professor of obstetrics and gynaecology noted that the risk of a woman dying because of pregnancy or child birth is 1 in 15 compared to what obtains in the developed world (1 in 5,000). Little wonder, few Nigerians who could afford foreign medical trip, jet out to be safely delivered of their babies.

Sometimes ago, the government of President Muhammadu Buhari expressed its interest in halting medical tourism by Nigerian politicians and administrators but in retrospect, we know, he actually meant the opposite. As reported by Business Day, March 30, 2020, President Buhari did spend a total of 154 days (between January 19 to March 10 and May 7 to August 19) receiving treatment abroad. Even though the cost incurred has been unpublished, Nigerians, however, are believed to spend over $1billion annually on medical tourism, that's something close to #307 billion, which is just a little below the #359 billion budgeted for the Federal Ministry of Health in 2020. For President Buhari, he has only followed in the footsteps of his predecessors. The late President Yaradua observed 109 days out of his 1,072 days in German and Saudi Arabian hospitals, same as a former Head of State, Gen. Ibrahim Babangida with a record of a six-week medical vacation in both Switzerland and Germany.

With preference for foreign medical attention, it needs no further proof that the hospitals in Nigeria, to the exclusion of a few, must have been wretched structures with second-rated facilities. Often times, the government has demonstrated its fake concern and chronic insensitivity by sacking or threatening to sack the health professionals whenever they are on strike. In 2012, for example, Lagos State Doctors who were on strike in protest of non payment of their salaries were threatened with sack. This scenario ,again, leaves us with two perturbing questions: Are Nigerian leaders still with conscience? Do medical officers deserve contempt? In summary, the health of the citizens is the asset of any nation while the happiness of the health workers is all we can give back in appreciation of their endless risk. Kudos to the health professionals. Long live the Nigerian Medical Association! Long live Nigeria!