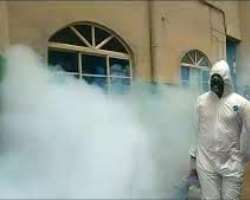 Onitsha, Eastern Nigeria, Friday, 24th April, 2020: The Government of Lagos State has truly done well in its efforts at taming the spread of COVID-19 and treating those already living with it. It is not as if the State has fully arrived or can be compared to what is obtained in the western world, but it is still next to none in terms of measures put in place and results already achieved. For embarking on COVID-19 fumigation of their two urban areas instead of waiting in vain for the Government of Anambra State, President Generals Agozie Okoye of the Iyiowa Community Association and Afam Udeogaranya of the Onitsha Fegge Housing Estate Community have also done very well.

Based on prevailing circumstances Lagos State has found itself or going by the realities on the ground, the State Government has done well. The public enlightenment modes adopted by the State (use of English and native Yoruba languages) is first of its kind in the recent time Nigeria. The call to serve and communication language of the State Government also totally depicts civility, humility and democratic friendliness. In terms of ‘testing capacity’ in the country, going by ‘Nigerian standard’, Lagos State is the best. However, in the area of the virus of “borrowing governance” or “government of debts’, Lagos State is the worst in Nigeria, Intersociety concluded.

Efforts Of The Two Urban PGs In Anambra: The quick responses of the two urban President Generals resulting in fumigation of their areas with anit-COVID-19 chemicals as recommended by the World Health Organization have gladdened our heart. These are typical case of community selfless service or constitutional corporate social responsibilities. They have further shown that not even complaint of ‘lack of public funds’ can retard or stop societal growth and development. It is on ancient and modern records that through the use of ‘soldier-ant and termite methods’, magnificent and largest mansions and monuments have been built in different cities and societies across the world using direct labor. That was how the Great Chinese People Parliament or the Great Hall of the People, the largest in the world was built.

The China’sGreat Hall of the People was completed and opened in Sept 1959 as ‘one of the Ten Great Constructions’. It was completed for the 10thAnniversary of the People’s Republic of China (PRC)’. Its ten months construction period began after design proposals were submitted by a group of architects from across the country chose the winning design done by Zhao Dongri and Shen Qi, with Zhang Bo as the chief architect. The construction lasted for ten months involving 7,785 workers.

While the Government of Anambra State has continued to sit armchair particularly in the area of fumigation of all nooks and crannies of the State with anti-COVID-19 fumigation and provision of protective kits and feeding palliatives to the citizenry or engaging in ‘random sampling’ approaches, where done, other public spirited bodies and individuals in the State are called upon to borrow a leave from the two urban PGs and their associations. It is even better for public spirited individuals in the State to channel what they have for anti-COVID-19 prevention into their communities, specifically in the areas of anti-COVID-19 fumigation and provision of protective kits; than to donate cash sums that cannot realistically be accounted for. For easy links on how to anti-COVID-19 fumigation, interested bodies may call the line below for third party contacts