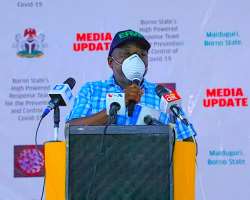 The Deputy Governor of Borno State, who serves as Chairman of the high powered response team against coronavirus, Alhaji Usman Umar Kadafur has revealed that out of the 104 persons believed to have had contact with Borno’s Covid-19 index case, 48 persons have been tested, 44 persons have tested negative to coronavirus while two persons tested positive and two results are being expected.

He said the two postive cases were those already announced from an update released by the National Center for Disease Control, NCDC on Monday night.

The Deputy Governor gave the update at the first in series of daily media briefing by his team, which held at the multipurpose hall of the Government House on Tuesday afternoon. Kadafur told journalists that Borno State has four cases as at Tuesday evening. Two persons who had contacts with the index case and a citizen of Borno state who tested positive in Gombe after he came in from Lagos.

The citizen has been moved from Biu to an isolation centre in Maiduguri and he is being monitored.

He said the patient is currently being managed by his response team in Borno state.

The State Commissioner for Health, Dr Aliyu Salihu Kwayabura explained that a competent team is in Pulka where the index case emanated, carrying out different investigations.

He said that the state’s response team was in control of the situation.

Commissioner for Home affairs, information and Culture, Babakura Abba Jato assured the public that the response team will be providing daily updates to keep everyone informed.