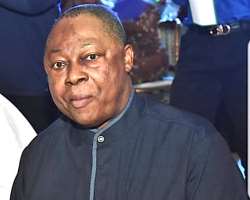 Chief Williams Anumudu, One of Nigeria’s most prominent businessmen and society personalities, ihas passed on.

He was aged 68 years
Anumudu was the chairman of Globe Motors, one of the foremost automobile companies in Nigeria. His death occurred in the early hours of today, Tuesday, April 21, 2020, and it was confirmed by Bashorun Dele Momodu, the publisher of Ovation International Magazine and a close family friend of the Anumudus.

It was gathered that Pa Willie suffered some health challenges few days ago and “was tested for COVID-19 which came out negative”. According to sources, plans were underway to air-lift to Germany. Unfortunately though, he died around 4am on Tuesday.

His wife, Nkiru is reported to be away in London at the moment. She had traveled to London to attend the 80th birthday party of Justice Adesola Oguntade, the Nigerian Ambassador to the United Kingdom. She decided to stay back to nurse her ailing brother.

The marriage between Pa and Ma Willie, as the Anumudus are fondly called, was blessed with four children – Uzoma, Eyinna, Zinna and Zikky.