Lagos State Govt Shuts Down Hospital where Abba Kyari was treated, five others 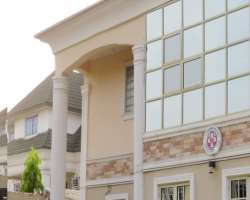 Lagos State have shut down Six private hospitals in operations after some workers were exposed to COVID-19.

The State government on Monday decontaminated the hospitals and placed them under lock for two weeks, Daily Trust reports.

One of the hospitals, Vevic Lifecare Hospital in Lekki, in a statement announced that the management suspended operations for approximately ten days.

It said the decision became necessary after a COVID-19 patient was inadvertently admitted at the facility and two hospital staff members contracted the deadly virus.

The staff and family members who visited the hospital or had been in contact with anyone who visited any of the above-listed hospitals were advised to self-isolate and call the Nigeria Centre for Disease Control (NCDC).

Recall that a letter signed by the Clinical Director of St Nicholas, Dr Ebun Bamgboye, made available to the public on Monday confirmed that the hospital has suspended activities for two weeks.

Bamgboye added that patients will henceforth be attended to through telemedicine.