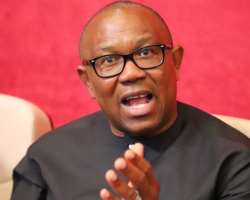 The Vice Presidential candidate of the Peoples Democratic Party for the 2019 election, Peter Obi, has denied buying any house in Enugu, Enugu State.

The denial was contained in a statement by Obi’s Media Aide, Valentine Obienyem, on Monday.

The denial followed a post on Twitter alleging that Obi bought a house previously owned by Nigeria’s former Minister, Chu Okongwu, said to be worth N650 million.

The statement by Obienyem said: “I saw a post on Twitter that Mr. Peter Obi bought a house that previously belonged to Dr. Chu Okongwu, located at the end of Oba Close, GRA, Enugu.

“Let me make it categorically clear that Obi did not buy any house in Enugu or any other place in Nigeria.

“Obi owns a house in Onitsha. When His Excellency, Barr. Sullivan Chime. was the Governor of Enugu State, he allocated a choice plot of land to Obi, who told him he did not need it because he would not live outside Anambra State after being a Governor of Anambra for eight years, except any fresh duty compels otherwise. The same offer was made by the then governors of Delta and Abia states, but Obi refused because he said he would not live in those states.

“Let me also make it categorically clear that Obi always says that he is not a poor man. He was Chairman and Director of many quoted companies by virtue of his investments before he became Governor.

“In addition, Obi is from a very rich family. His late father was among the richest in Onitsha in those days and owned Ideal Supermarket in Onitsha, the biggest in the town before the civil war. Obi also has very rich brothers.

“His apostolate today is visiting and supporting schools and that is one of those services to humanity that give him joy and not material acquisitions; he has always maintained that he has passed that level in life, and that his preoccupation now is giving back to society.

“If he wants to buy a house anywhere around the world, he can easily afford it, but he did not buy any and is not planning to buy one.

“What is uppermost in his mind right now is his contributions to COVID-19 efforts and raising money to support schools that will be affected after this COVID pandemic.”