We Are Committed To Partner NYSC - Imoke 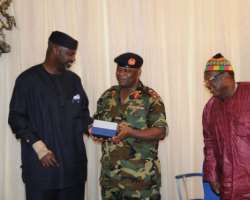 CALABAR, June 25, (THEWILL) - The Cross River State Government says it is committed to partner the National Youth Service Corps (NYSC) to enable it fulfill its statutory responsibility of nation building and integration.

While receiving Brig. General Maratsu I. Tsiga, Director General of NYSC in Calabar during a courtesy call, Wednesday, Imoke stated that it is government’s belief to partner NYSC because of its impact on the life of the people and it is its duty and responsibility to continue to support the programme, explaining that the renovation work at the NYSC camp, Obubra is a temporary thing not permanent as they will soon enjoy the best camp in the country when renovation is completed.

Imoke said the state would sustain investment in the youths as foundation for development in a manner that gives hope and efficiency in service, adding government’s commitment to provide all round support in infrastructure and transportation as well as offering employment to those who excel in the state public/civil service.

The Governor assured that despite the challenges faced by the scheme any one sent to the state will be part of the state while commending the management of the NYSC for its vision and commitment as well as the financial support given to the family of the corps member murdered in Maiduguri from Cross River.

Brig. General Maratsu I. Tsiga, Director General of NYSC, who said he was in Cross River to witness the passing out of 2009 batch B Corps members as well as, appreciate the government for assisting NYSC to ensure its members enjoy their service in the state, added that the state is an example of where welfare of corps members are given priority from orientation allowance in camp, assistance to its skill acquisition programme and that no negative information has been received on corps members.

Tsiga mentioned that the six thousand corps members posted to the state will have their orientation in Delta, Akwa Ibom and Abia States, pending when renovation work at the permanent orientation camp is completed.

He requested that the state organizes transport to convey those corps members to Calabar for them to be distributed to their places of primary assignment because they see it as a big challenge now that mono-technics, specialized institutions and 15 new universities have been approved to participate in the programme.

The Director General disclosed that about 86,000 youths will participate in 2010 exercise and appealed that the government should build corpers lodges and transit camps to assist in their movement within the state.