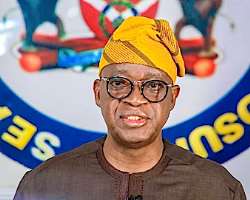 Osun State Governor, Adegboyega Oyetola has released 34 inmates from prisons in the State as part of efforts to decongest prison.

A statement issued on Sunday by the Chief Press Secretary to the governor, Ismail Omipidan, made available to The Nigerian Voice by Senior Special Assistant to the Governor on Media, Mabel Aderonke, said the amnesty was in line with the decision of the Federal Government to decongest custodial centres in the country, as part of measures to contain spread of Coronavirus.

Omipidan disclosed that 17 of the 34 inmates were granted amnesty by Governor Oyetola, while the others were pardoned by the Federal Government.

He further noted that the inmates were considered for amnesty on grounds of old age, ill health, sentence of three years and above with less than six months left to serve, fine of less than N50, 000 and inmates who have spent 75 percent of their remaining sentences after remission and fine of of less than N50, 000 with inability to pay among others.

“You will recall that the federal government had directed that all custodial centers be decongested to avoid the spread of Coronavirus in the county.

“To decongest correctional facilities in Osun, Governor Oyetola has graciously approved the request of the Controller-General of the Correctional Service and granted amnesty to 17 state offenders.

“The federal government also granted amnesty to 17 inmates, bringing the number to 34 prisoners who are affected in two custodial centers in Osun.

"But those who were convicted over violent offences like murder, armed robbery, terrorism, kidnapping, and rape did not benefit from the amnesty, " Omipidan added.