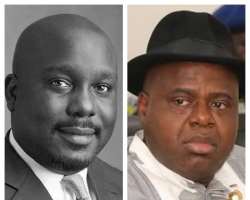 The Governor of Bayelsa State, Douye Diri on Thursday said he was saddened by the sudden passing of Keniebi Okoko, a former governorship aspirant of the Peoples Democratic Party in the state.

In a statement by his acting Chief Press Secretary, Daniel Alabra, the Bayelsa State Governor described the late Okoko as an Ijaw icon, pillar and astute businessman. Diri said Bayelsa State and the country had lost a man with great potential, whose philanthropy and impact as a young politician would be greatly missed.

The News Agency of Nigeria reports that Okoko, who died at age 42, contested the September 4, 2019 PDP governorship primaries alongside 21 other aspirants and came third in the contest that Diri won.

The late politician, a son of the former President of the Ijaw National Congress and former lecturer at the University of Port Harcourt, Prof. Kimse Okoko, died on Tuesday at a private hospital in Lagos after an illness.

The governor commiserated with the deceased family, his aged parents, and the Obunagha community of Gbarain Clan in Yenagoa Local Government Area of the state.

Diri said: “As a fellow aspirant in the course of the PDP governorship primary, I got to know him quite well.

“He always presented himself as a patriotic, intelligent, gentlemanly, courteous, and devoted Christian.

“He was always passionate about the prosperity of our state.

“I was, therefore, not surprised when I emerged winner of the primary election, Keniebi showed great sportsmanship by immediately congratulating me and collapsing his political structure into mine.

“He worked energetically to ensure our victory.”

Diri noted that Okoko’s death was a huge loss to the PDP family in Bayelsa State, coming at a time the party had great hopes in him to contribute to furthering the frontiers of development of the state.

The governor prayed God to comfort and grant his parents and immediate family the grace to bear the “painful loss”.

He added: “The sudden passing of Okoko came as a rude shock to me.

“It is equally painful just as it is tragic.”