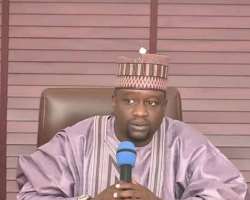 The Chairman, Borno State High Powered Response Team for the control and prevention of COVID 19 in the state who is also the State Deputy Governor, H.E Hon Umar Usman Kadafur has expressed dismay on the level of non compliance of restriction order on vehicular movements in and out of Maiduguri city .

He could not hide his displeasure over the dissatisfactory way that commuters were abusing the restriction order of vehicular movements in and out of the state recently enforced.

The Chairman Covid -19 Committee made this known when he visited Njimtilo village check point at the outskirts of Maiduguri along Jos/ Kano linking Kano, Jos, Kaduna, Bauchi, Yobe, Lagos, Ava, Enugu, and Gombe to monitor whether there was compliance on the directive restricting movement of vehicles in and out of the state to curtail the outbreak of coronavirus in the state.

Hon. Kadafur and some other members of the committee at arrival at the Njimtilo gate discovered that there were heavy movement of vehicles in and out of the state which is an indication that the security personal are not enforcing the restriction order accordingly.

The Deputy Governor at the Njimtilo gate further directed for the total closure of the gate and asked all those coming into the state capital to return back to where they were coming from while urging the security personal to live up to expectation.

Hon Kadafur said the restriction order was not done to punish travelers but rather to protect the life of people against the deadly disease stressing that the reopening of the gate on Monday was done to allow those who did not have adequate information on the restriction order, adding that, this does not give room for the continuous violation of the order.

The Deputy Governor also directed the security personel to ensure that henceforth nobody should be allowed entry in and out of the state while the committee, according to him would embark on continuous strict monitoring to ensure compliance.