Prophecies, Politics and People: A Puzzling Trilogy in Nigeria 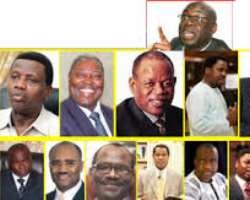 While a few historians might have denied Nigerian history its true substance, it is less controversial that history itself- a living god- has been faithful. Nigeria in its special right is a historical nation. Its length and breath are wrapped jealously in precious histories. In the 15th century, Christianity made its first appearance in Nigeria through Augustinian and Capuchin monks from Portugal. Islam-the twin significant religion in Nigeria- landed through two geographical routes. Following the birth of these foreign religions, the Nigerian practitioners of them are between extremism and lukewarmness.

Prophets and prophecies are seriously vital to the wholeness of the two religions. It is common knowledge that even the highly educated consult with their prophets to take corporate decisions. It is like, we have the knowledge but they have the superior knowledge. Issues ranging from employment, marriage, travelling, business among others top the consultation list. With the-right-to-direct power given to the religious lords, the battle for supremacy began. Every year congregants wait eagerly to hear words of the gods or God from the Oracle messengers or pastor-prophets. Like a well-scripted actor, they throw some suspense into air to further amplify the nervousness of their sheepish followers. The seer must thunder and more so his visions are clear. Between 2019 and 2020, the seasoned Apostles, General overseers, Primates, Prophets, and Reverend gave prophecies with the most magestic swag to douse the suicidal tension and catastrophic emotions of the Nigerian people. Let's start with Primates Ayodele and Akeju, the former drew a resounding scream from his followers and fans when he echoed a PDP Kwara State, come the end of the election. The latter saw the return of the former Lagos State Governor and an Atiku-led government come the end of the election. None of these prophecies or predictions, perhaps, figs of imagination manifested. Now we know that the gods messengers or God's servants are sometimes if not always delusional. Prophets Olagunju and Kasali saw an Atikulated nation, too. Another goof! Were the sons of the gods or God bribed, tricked or deceived by their own god? It is high time they swapped their gods or God. Apostle Suleiman, in a rugged vision, saw a PDP Ekiti state, a heavy spiritual error! Prophet Akinboduse, a Nigerian-South African based pastor added his name to the failers in the realm of the spirit. A young president with an S initial will emerge Nigerian president, in fact, we saw an old man emerge. Now that the sons of the gods or servants of God have been deceived by their own gods or God, let's turn to politics.

Politicians in Nigeria may not be respected but certainly envied. It is both the seat of power and dangerous wealth. To renew your wealth as a politician, then, you need to recontest or seek another elective or appointive position. Put together, once you remain in the corridors of power, your wealth life is guaranteed. No where is the Machiavellian principle more real than in our politics. The end will justify any means. From defection to decamping to cross carpeting. From vote buying to propaganda and character assassination. Any means is a means, we care less. A former vice president- Atiku Abubakar is a reigning sample of the keep jumping syndrome. A to and fro politician, all that matters is self ambition, nothing more. The current president, though not as politically promiscuous as our man, has similarly dangled, from ANPP to CPC to ACN-a merger party. The cases of Nyame and Dariye-ex governors- prove to the blind and the deaf that those who lead us actually lead our money out of the state and national purses to their private accounts. Unfortunately, many are the criminals that rule than those in jail. Stealing of state and federal resources is now in billions. These kidults don't pilfer in millions anymore. These men of the people have their own people. Pathetically, the poor Nigerians are surely not their people. Now that prophecies have failed and politics have also failed, how about the peope- the last p in the trilogy? Hope they are different? Let's see!

Nigerian people are great people, supernaturally blessed and naturally endowed. We are hardworking and hopeful. Even if we fight one another, we like peace. We strive daily to survive. We believe in God and His prophets. We are good at what we do. For how long shall we continue to make ourselves slaves of the prophets and the politicians. One thing about the duo is wealth and control. They get their wealth through similar means-brainwasing and manipulation. Empty promises and barren prophecies. While the former use the name of God as a cover, the latter use tribalism and selective generosity as a mask. The two enemies have hijacked the minds of the people, it is either we are in political shackles or a prophetic coven. We are the leather ball they both play around. We suffer from their excesses. When they loot, we cry, they fart, we grin... During election, they give us money, $11 I guess! With this they hack our hearts and axe our mind. Power renewed and the looting continues. It is time to say no to the manipulative prophecies of the prophets and the unending promises of the politicians. They may be men of our tribes, or our close relatives or vey blood, nonetheless, they remain the true plague of the Nigerian trilogy. May God bless Nigerians and bless the world!