The War Against Media Practitioners In Delta By Security Agents, A Call For Restriction 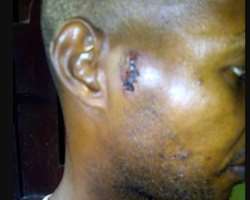 It is becoming disheartening that media practitioners in the course of carrying out their constitutional responsibility, have unfortunately, turned targets of attacks by members of the public, particularly security agencies and governmental bodies in Delta State.

Only recently, the Chairman of the NUJ, Michael Ikeogwu and a reporter with Daily Trust newspapers were harassed and manhandled somewhere in Effurun, Uvwie Local Government Area of the state for inquiring from officials of the state environmental taskforce if people should congregate for clean up in the face of effort aimed at curtailing the spread of the Corona virus.

Few days after that incident, a photo journalist with the Pointer newspapers, Norbert Amede, was brutally attached by security agents (the police) in Ibusa, Oshimili North Local Government Area. The attack left Amede physically disfigured and hospitalized for days.

Yesterday, Wednesday, April 15, 2020, Uvwie Local Government registered another attack on media personnel from Delta Broadcasting Service (DBS), Warri, who were on their routine to monitor compliance of the lockdown and more importantly, social distancing at the Effurun Market.

A release signed by the chairman, Comrade Michael Ikwuogu and Secretary, Churchill Oyowe and made available to The Nigerian Voice, said: "We view this latest attack and previous ones as barbaric in an era where democratic tenets and freedom of the press are expected to be held in high esteem.

"NUJ Delta State Council hereby, aligns with the earlier call by the DBS Chapter of NUJ and RATTAWU call on the Chairman of Uvwie Local Givernment Council, Mr. Ramson Onoyake to apologise to NUJ as well as arrest, interrogate and prosecute the team that attacked the DBS crew or face imminent boycott of coverage of programmes and activities within Uvwie Local Government Area.

"We recall that in the wake of the lockdown, the media were among those exempted from movement restrictions. This is because of the vital role the media, like other critical sectors, play in the developmental advancement of society".

Sadly, the leverage of the media to operate responsibly is daily curtailed and threatened by security agents and government officials who have skeletons to cover.

"We wish to state that the media will not be daunted in the face of the unfriendly atmosphere some security agencies and government officials have put in place".

Nevertheless, we wish to remind governments at all levels in the state of their responsibility to protect the lives of the citizens, including media practitioners. We have not recorded any death among our folds. At the rate these abusers of the media are going, we might soon register.

This is why the authorities must stand up to their responsibilities and protect the sanctity of the freedom of the press as enshrined in the 1999 Constitution of the Federal Republic of Nigeria, as amended.

"We however call on our members to be law abiding and continue to go about their duties responsibly while we call on authorities in the local, state and federal governments to take urgent steps to stem the tide of attacks on media personnel".

For the avoidance of doubt, our governmental bodies should be reminded that these same media they are treating with disdain were at the forefront of the fight for the democracy these levels of government are presenting savouring. The media deserve a better deal.

In conclusion, "we may be left with the option of a total blackout of coverage of the lock down order if the needless attacks on our highly esteemed members continues".