Says:"Keniebi Was My Friend, Brother And Someone Who Impacts Every Soul He Comes In Contact With
By The Nigerian Voice 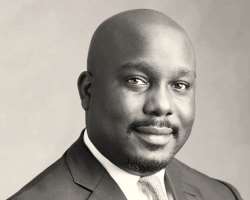 Dr. Dakuku Peterside, the former director-general of NIMASA, has expressed grief, anguish and misery over the death of his Bayelsa Brother and Friend, Keniebi Okoko.

In a statement Wednesday, Peterside stated:“I start by a confession, Keniebi was my friend, brother and someone who impacts every soul he comes in contact with. Yesterday I got a call and rushed to the hospital where I met him lifeless.

“What is important is that he lived a good and impactful life and sure he has gone to be with the Lord”, he said.

Peterside revealed the tense situation he met at the hospital after Keniebi had passed on. “I got to the hospital about 8-8:30pm and ijaw men and women, and other friends of his from across the country ( high , mighty, ordinary folks ) have taken over the hospital and were ready to go to “war” for most loved Kenebi.

“It simply restored my faith in brotherhood and humanity . “Too many persons, in the midst of wailing, were willing to help to ensure that a loving soul like Kenebi is not put to shame .

“The second observation is that all and sundry were not happy with the professional handling of the medical attention he got leading to his death and are demanding that we must get to the root of the matter so persons whose professional negligence led to this avoidable death must be held to account for it .

“In Kenebi’s death, I have seen the outpouring of love and appreciation of impact living . May the soul of my beloved brother KENEBI Rest In Peace and May we continue rallying each other whenever the need arises”.

Keniebi died in Lagos on Tuesday night during a tragic tummy tuck surgery in a Lekki hospital. Until his death, he was a businessman and also pastor of Salvation Ministries in Port Harcourt.

Many Bayelsans and people who he had touched in his lifetime, were shocked by his sudden death. The atmospher in bayelsa as a result of Kenebi's passage is that of distress, agony and sorrow. May his soul rest in the bossom of the Lord.