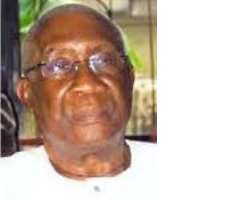 Ikwuemesi died today in London, United Kingdom few days after he was diagnosed for coronavirus pandemic.

A source close to the family disclosed that Ikwuemesi was admitted to an unnamed London hospital after brief illness.

He later tested positive for COVID-19 in the result that was released on today (Tuesday).

He was in Intensive Care Unit (ICU) on oxygen since he arrived the London hospital.

The source added: ”But, when the oxygen was removed for him to eat he couldn’t breath on his own.

”So they put him on a ventilator and he died shortly after.”

Everyone who knew Victor will ever forget him; millions who never met him but felt they knew him will remember him for what he was worth: a humanitarian and successful business magnate who lifted himself by the jockstraps to confront poverty, the affliction of his childhood and conquer it.

Death, the dreaded dialogue between the spirit and the dust has finally manifested like a dark pall, shielding the late millionaire’s mortal soul from the beams of life