Conspiracy Theory I – 5G, NWO and the Antichrist 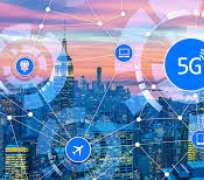 Over 2000 years A.D, Christians all around the world are celebrating the commemoration of Christ’s death on the cross and His resurrection two nights after. This year’s celebration is rather different from previous editions in recent years, with little or no outdoor activities and social gatherings as has become the tradition, due to the restriction on movement and congregating.

Amidst this lockdown have been debates among the ‘elite class’ in Christendom on one of the important lessons of Eastertide – the identity and coming of the Antichrist. Suddenly in recent weeks, not a few proponents and apologists of the ‘Antichrist and a New World Order (NWO) is here’ theory have arisen, coinciding with the covid-19 contagion and particularly the release of the Fifth Generation (5G) Network. While it has taken scientists around the globe, led by China and USA, 21 centuries of continuous research and investments to reach this redefining milestone in the history of science, the evolution of technology from the Zeroth Generation (0G) to the Fifth Generation (5G) has almost always brought about differing opinions within the Christian circle. This article chronicles some of such moments:

In the years preceding 1979, the world was at a pre-cellular age (0G), yet not without confusion as to who the Antichrist is. The Infamous Emperor Nero of the Roman Empire, whose name in Hebrew reportedly can add up to 666 (the mysterious mark of the beast), was accused of heinous crimes not limited to matricide, uxoricide, and notoriously persecuting the early church. For his Luciferian inhumanness, Nero was accused as the Antichrist until his death in 68 AD, aged 30. Littered throughout this era are other men of science and authority who were speculated as the Antichrist, including French Napoleon Bonaparte, Benito Mussolini of Italy, Germany’s Adolf Hitler and America’s John F Kennedy, all of who are at the time of writing are dead.

The first generation of wireless cellular technology was invented in 1979, enabling telephones to make calls using analog telecommunication standards. The 1G technology was invented in Japan – a nation recovering from the spoils of WWII – perhaps, the reason for not so many recorded opinion clashes among Christian scholars at the time. However, this groundbreaking landmark laid the foundation blocks for several generations of technological disruptions which would occur in the future.

In 2001, the world witnessed the birth of the 3G network. The growing popularity of the three-lettered-acronym for World Wide Web (WWW) at that time drew comparisons to the ‘666’ from certain quarters, who dubbed it the Antichrist. While they glibly passed such cheap remarks about the ‘ www.’ invention, the world was again disrupted by 3.5G, 3.75G and 3.95G, in addition to the centre-stage prominence of the television among Gen X and millennials.

Speaking about television – a personal experience serves a profound highlight of one too many debates within the Christian community during the 2G/3G era.

Born into a Christian family in a millennial year, I remember never seeing a TV in our home for almost 10 years. This had nothing to do with my parents’ ability to afford a TV – rather surprisingly, it was as a result of the doctrinal teachings of our religious denomination at the time. Televisions were regarded as ‘Satan’s box’ and ‘Idols’, hence, owning one put you at the risk of being labelled sinful, satanic and idolatrous. I was aged seven when my family started attending another denomination. The situation was the same as our former church. When eventually in 2006 Dad bought the first TV in our home – a Sharp TV with hunched back – he placed it in the bedroom away from the living room. I like to think that he did that out of reverence for the church’s doctrine and to avoid misleading visiting members of the church.

Down the line, events have overtaken this belief. In both denominations, new model TVs and satellite dishes have been mounted in almost every branch and zone. The leaders recognized, correctly I would opine, the importance of reaching a wider audience through this channel and spreading the love of Christ through and true.

Fourth Generation (4G) era
Introduced to the universe in 2009, the fourth generation of wireless cellular technology brought to reality the promise of mobile broadband internet access which supports smartphones and advanced electronic gadgets. As with older inventions and controversies, still widely debated is the notion of whether Bible applications on smartphones and tablets should be allowed for reading in the church. The younger and tech-savvy generation find this ease of access to God’s word an option going forward while the older and conservative frown at such ‘strange fire’.

Now upgraded to 4.5G, this era has engendered live/online video streaming among congregations with large memberships. During services, online congregants can now connect from the comfort of their homes, offices and other locations without barriers or restrictions. Despite this promise, the network latency of online streaming can be frustrating and discouraging for believers during services, especially during poor weather.

To set an illustration, a world record was set in March 2020, when three billion worshippers joined a live broadcast to pray for all nations. This was such an amazing medium to reach the world as Christ instructed (Mark 16:15). On the flip, there were hypothetical millions of people, including me, who could not join the live streaming due to poor network. To beat this challenge, I’d have to stand all through in my veranda close to the wall, holding my phone at a certain angle. That really is a challenge and brings us to the promise of 5G.

Fifth Generation (5G) era
Forty years since the launch of the 1G, China launched the world’s first 5G network in 2019 – beating arguably the world’s most powerful country, USA, to the innovation. In the months leading to the launch, economic tensions and several hostilities had severed relations between the two most powerful economic nations in the world. When we thought the war between both nations was beginning to end, the world was struck by a disease which broke out in Wuhan – one of the trailing Chinese cities with 5G infrastructures. Designated a pandemic by the UN in March 2020, it is one of the deadliest diseases in modern history and has infected 1.8 million people, killing 108,000 at the time of writing.

Certain school of thoughts have linked the cause of the infection to the advent of 5G, after all, the virus was first discovered in humans one month after the launch of the network in the same country. Plausible! However, there are not enough proofs, scientific or otherwise, to link the charted spread of the disease to the technological disruption.

And, yes! 5G technology is a disruption to the existing world order like every major invention before it, but not the causative agent of Corona Virus Disease (Covid-19) as it has been suggested by some preachers. The mad rush for 5G supremacy from a business, political and social purview adds up, in an age where data is the new oil. 5G is the future the world looked forward to last decade – so any country, businessperson or investor would do anything possible to secure controlling interests over it. This ultimately will create new billionaires and trillionaires, redistribute economic power and might, even out bragging and bargaining rights and possibly cause the downfall of dynasties. This is a New World Order (NWO) the world is bracing up for.

Having established the foregoing on the premise of information yet known, is 5G then the ‘new’ Antichrist?

Theologically, the Holy Book advises us on the order of events that will precede and follow the coming of the Antichrist but does not specifically reveal his identity, instead warning of his corrupt teachings and false prophecies (Revelation 13:1-18). The Scriptures tells about the end-time signs, then the rapture of the saints, followed by the coming of the Antichrist, the return of Christ, then the millennial reign and penultimately the Armageddon battle before the end. It is plausible that the Antichrist will make use of the 5G infrastructure, or whatever the latest infrastructure there will be at his coming, yet the Bible does not tell us he would need man’s devices to establish his scourge over the world.

If 5G is the forerunner of the Antichrist like is been told, then we may have been in a state of inertia all along not to question the invention of 1G, 2G, 3G and 4G. 5G is not the Antichrist, neither did it set the ball rolling for the coming of the beast. Whether the world lived in the era of 1G or 100G, the Bible tells us he would come. If therefore, is the Bilderberg group or Illuminati or B Obama or B Gates the Antichrist? I’ll let you decide. We are however reminded that “… the gates of hell shall not prevail against the church.” (Matthew 16:18).

So, while the church may not be at the forefront, head and shoulder, of these technological disruptions, we should design plans on when and how to adopt them and prayerfully work out these plans.

Sixth Generation (6G) era
Yes! You read that right. While the entire world is still divided on whose is the 5G network, the Lord’s (who gives wisdom – James 1:5) or Lucifer’s (who weakens the nations – Isaiah 14:12), UK’s Daily Mail reported in November 2019 that China had kick-started the development of 6G technology, less than a week after rolling out 5G. ( https://www.dailymail.co.uk/sciencetech/article-7656417/China-kick-starts-development-6G-technology-week-rolling-5G-network.html )

The rhetoric thus is – if 5G is the Antichrist, what would 6G be called?