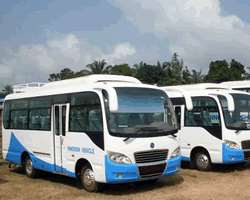 Buses built by Innoson in Nnewi
The Federal Government recently took what has been described as a bold step towards addressing the pathetic state of the country's automotive industry when it set up a committee to x-ray the problems of the sector with the aim of making it vibrant once again.

Inaugurating the committee in Abuja, Vice President Mohammed Namadi Sambo, charged the members to properly look into the challenges that have interplayed against growth and viability in the auto industry, and accordingly, recommend workable solutions.

Chaired by the Minister of State, Commerce and Industry, Mrs. Josephine Tapgun, the committee drew its members from the Bureau for Public Enterprises (BPE), National Automotive Council (NAC), Bank of Industry (BOI), Union Bank of Nigeria Plc, representative of the Ministries of Finance and Commerce. Specifically, the committee is expected to advise government on the appropriate tax relief for vehicle manufacturers, policy formulation, competiveness of locally made auto products, and better business models.

Through the auto manufacturers are getting weary of crying for an enabling environment over the years and getting only government's lip-service in return, the recent initiative has been received with an unusual lets-give-the-Vice-President-a-chance attitude.

The optimism is fuelled by what some stakeholders say is the fact that the ailing auto sector seems to be top in the priority of the Goodluck Jonathan's administration. Otherwise, they say, the government would not have thought of empanelling a committee to advise on the solutions to the industry's problem only weeks after assuming office.

One of the optimists is the Executive Director of Nigeria Automotive Manufacturers Association (NAMA), Mr. Arthur Madueke, who recalled that the Vice President was until recently the governor of Kaduna State, where PAN Nigeria Limited, is located, and by that proximity understands the perilous state of the auto industry, which snuffed life out of almost all the six auto manufacturing plants set up by the federal Government between the mid 70s and the early 80s as components of its development plans.

'Almost', because aside PAN which has managed to stay alive against odds, others are either dead or hanging on shoe strings, even after they were privatized. Examples abound in MB-AMMCO, Enugu; Leyland in Ibadan; Volkswagen, Lagos; and Steyer in Bauchi.

But, what were the factors that conspired to make it difficult for the auto plants to survive after the buoyancy that lasted till the late 80s? Chief among them was the unfair advantages the fully built imported vehicles enjoyed (and still enjoy) in form of low tariff differentials. Also contributing were dwindling patronage, especially by all tiers of government and their agencies who account for the bulk of vehicle purchases in the country , as well as poor infrastructure which, along with the weakness of the naira vis-Ã -vis the value of international currencies, jerked up the prices of the locally made vehicles.

These are draw-backs which the stakeholders say the Mrs. Tapgun-led committee should recognise in drawing a blue-print for the impending government rescue plan for the industry. The NAMA Executive Secretary told Daily Sun Motoring that the specific steps which government needs to take include:

*Activate Gazette No 28 of 1994, which requires government and all its agencies and parastatals to source all their vehicles from the local plants, but which has never been implemented.

*Ensure a wide duty differential between fully built imports and CKD sets for local manufacturing of vehicles. For instance, in Malaysia, CKD attracts 35 percent duty against 105 to 165 percent for fully built vehicles (differential of 70 to 130) in favour of the CKD importers (local auto plants).

*Ensure easy access to finance, in form of soft funds which will attract low interest rates.

*Grant pioneer status to new plants like Innoson Vehicle Manufacturing Company Limited (IVM), Nnewi; which means exemption from taxes and certain charges for a number of years, to enable them stabilize.

Auto industry analysts are of the opinion that PAN deserves special doses of encouragement for keeping the assembly lines active with the production of new generation cars like the 307 sedan. Moreover, even against daunting problems that stared at the new owners of the Peugeot plant, Alhaji Sani Dauda and ASD Motors, following the privatization of the company in December 2006, the management has continued to invest heavily in boosting production activities.

They are also of the opinion that new comers in the industry like Innoson Vehicle Manufacturing Company, which is an entirely private sector investment driven by a young entrepreneur, Chief Innocent Chukwuma, also need to be encouraged. Despite the obvious crisis in the industry, the Nnewi auto maker is said to have invested hugely in a plant which has started rolling out a range of high quality (mini, medium and luxury) buses, SUVs and pick-ups.

Sadly, like the older generation of auto manufacturers, there are indications that the Innoson plant is already being encumbered by challenges, such as access to zero-or -low interest funds, high cost of production and high charges on components. This is why it is being argued by stakeholders that new entrants, who defined the odds to venture into the industry, need tax holidays, patronage and unhindered access to finance, as much as the older generation of plants.