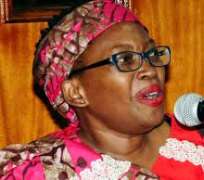 Dr. Stella Nyanzi, the Ugandan academic and critic of the country's military dictator Gen. Yoweri Museveni has been fighting for her life at Mmengo Hospital, in Kampala, the capital.

Dr Nyanzi, until the February 21, 2020, had spent over 18 months in the country’s notorious Luzira Maximum Security Prison on a politically-motivated conviction. She came out of prison less than 2 months and fell sick. She had spent months in jail over controversial charges of "annoying" the Ugandan ruler, which was dropped and convicted of cyber "harassment" and "offensive" communication to the dictator, who has ruled the country since he seized power in 1986.

Amidst fears by her supporters that she may have been poisoned, she was admitted shortly after she was contacted for an interview by this media outlet

Dr Nyanzi was recently featured in a New York Times article during which she said her wrongful incarceration hasn’t tempered her and she spoke critically about the kleptocratic dictator.

When contacted Sunday, April 5, Dr. Nyanzi, formerly a scholar at the nation's top university, Makerere, informed this reporter that she was unwell. "I'm not feeling well for the interview, but you can write down the questions. I will endeavor to answer your questions.” The next-day, this media outlet received a text message from her cellphone number saying,"Stella was admitted yesterday and she is in Mmengo Hospital."

"I have trauma triggered by torture in prison. Don't believe the lie that Janet murdered me! She has learnt to fear me," she added. Dr. Nyanzi’s reference was to Janet Museveni, wife of the dictator, who is also the country’s minister of education, a position for which she is profoundly unqualified.

Later, this media outlet received a video of Dr. Nyanzi that’s since gone viral on social media and has also been posted on YouTube. ”I was very sick, I was very dehydrated, I was foaming in the mouth,

"I was vomiting and I had nausea," Dr. Nyanzi states in the video, where she’s shown seated on a hospital bed, looking extremely weak and barely able to speak, a far cry from her normally booming attacks on the dictatorship’s human rights abuses. "I have been vomiting for about six-days before my family decided that the dehydration was too much and so, they decided to bring me to hospital by emergency services."

Dr. Nyanzi was at home for six days enduring the illness because the coronavirus shutdown by the Ugandan government, which made it difficult for any travel without authorization. Gen Museveni's directive requires anybody to seek permission from the Residential District Commissioner (RDC ) who represents the president in all districts.

“…I was dehydrating and being hungry and I could have died of hunger, simply because there was no transport to get me from home to a place where I could be infused with serene or glucose," Dr. Nyanzi, said.

She thanked the hospital for treating her —hospitals sometimes face retaliation by the brutal dictator for treating people perceived to be regime-opponents— and she added, “… I can now sit up, the nausea has stopped the foam has stopped, although, I am quite weak, I am able to take care of my personal hygiene need on my own right now."

She thanked her family and relatives for pooling money to pay for her medical expenses and for food. She said she’s being taken care of by her daughter Barack, and her nephew Sharifah. In the video, she also addresses her supporters concerns about possible poisoning, in carefully chosen words: "I want to assure Ugandans that, I am not dying as people have been saying. I am not poisoned, as far as I know. We are still waiting for the good laboratory results of the Mmengo hospital to conclude their results.” Rather than allay fears, the comments raised more concerns.

She also concluded, cryptically, “I thank you all, and I love you all. Keep safe. Make sure you don’t die of corona and that you also don’t die of other ailments such as the one that was disturbing me at home.” Many of her supporters read a deeper message in those words.

Many Gen Museveni's political rivals have succumbed to some mysterious illness or have mysteriously died in unexplained circumstances.

Former Museveni ally and a security analyst, Charles Rwomushana told this newspaper that: "She could have been hit."

Whilst former representative of Makindye West constituency, in the Ugandan Parliament, Hon Hussein Kyanjo, said: "I haven't spoken to her, but I got the bad news of her health condition. Stella has to continue to parsist there are many more harder times for her but with consistency she will over comd all."

Kyanjo, one of the finest Ugandan debaters, himself now battles a strange condition [Dystonia] he contracted whilst serving his country as an MP from Justice Forum (JEEMA) Party.

According to both Indian and London doctors, Kyanjo had one of the probabilities to get such condition [dystonia], which affected his speech could have been hereditary, major accident or poisoning. ( https://m.youtube.com/watch?v=xdGWlL_Yev8 ).

Previously, many other political actors who on principle refuse to toes with Gen Museveni, found themselves on a rough surface of the road.

The murder of Dr Andrew Lutakome Kayiira in March 1987, a former minister of energy and leader of Uganda Freedom Movement (UFM) group. Dr Kayiira had been cleared of the treason charges that National Resistance Movement (NRM) had accused of him. Over three-decades on, the murder remains unresolved and the Scotland Yard refused to make public the findings of the investigation about the murder of Dr Kayiira.

Subsequent deaths, include: Col Jet Mwebaze in September 1998 who body was discovered in the mountains after the plane crash but allegedly with a gunshot wound.

His brother at a rank of general, Maj Gen James Kazini, allegedly murdered by a girlfriend in Nawongo a suburb of Kampala. Unsatisfied, Kazini wife, Phoabe later requested for and independent inquest, which never happened anyway.

Brian Bukenya, son to the former vice-president Gilbert Bukenya. Bukenya 'Junior', miraculously had a car accident with five others, but only one sustained a cut in the head and no marks at the alleged crime-scene. During the funeral Dr Bukenya, was quoted as saying that, the incident was a cover-up his son's murder.

In 2007, Brig Noble Mayombo, then Permanent Secretary in ministry of defence, whose death until today remains a mystery. Though, Gen Museveni instituted an investigation whose findings remained a secret.

In December 2012, Cerinah Nebanda, then Member of Parliament from Eastern region, died in a small clinic and labelled a drug addict, though her colleagues differed with the official version. She had called a stronger executive authority over the country's oil. Then firebrand MP Cerinah Nebanda, once vocal critic of the dictator, who denounced corruption during a speech in Parliament, died soon after of an undisclosed sudden ailment. Her supporters believe she was murdered, poisoned on Gen. Museveni’s orders.

When Parliament and her family tried to send her tissue samples to South Africa for testing, soldiers arrested the doctors and a pathologist at the airport and confiscated the specimen.

With such unwinding number of unexplained murders and assassinations, there're fears of a possibility of silencing Dr Stella Nyanzi.

Dr Nyanzi, came out of prison less than 2 months ago and fell sick. She had spent months in jail over controversial charges of "annoying" the Ugandan ruler, which couldn't stand but rather convicted of ....

.
The charges were later quash, but convicted of.
( https://www.theguardian.com/global-development/2020/feb/21/stella-nyanzi-marks-release-from-jail-in-uganda-with-yoweri-museveni-warning ).

One of the questions this reporter had put to Dr Nyanzi was that 'there has been allegations for quite a long time that Gen Museveni's critics get strange illnesses after serving or spending sometime time in jail. When you find out that you contracted such diseases, what actions will you take? She hadn't responded and strangely fell ill.

"Any outspoken critic of the current Ugandan regime is today at significantly elevated risk of being stifled and silenced at any cost," said Steven Lwetutte, a human rights expert and a legal consultant, adding that: "Dr Stella Nyanzi is such an activist and her medical condition is legitimately suspicious unless and until otherwise proven."

Dr Nyanzi, came out of prison less than 2 months ago and fell sick. She had spent months in jail over controversial charges of "annoying" the Ugandan ruler, which was dropped and convicted of cyber "harassment" and "offensive" communication.