Presidential Task Force on COVID-19 To Meet President Buhari On Nationwide Lockdown, Others 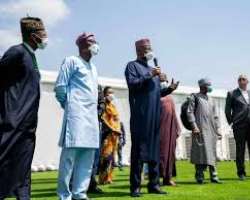 It was gathered that the task force would brief the President on the war against COVID-19 and the possibility of extending the two-week lockdown in the FCT, Ogun and Lagos states as well as including other parts of the country.

Two top government officials confirmed on Thursday that the task force would brief the President on Friday (today).

But at a meeting with the National Assembly leaders on Thursday, the task force said it had gathered data to enforce “lockdown of parts or all of the states” in the country.

One of the officials, who confirmed the President’s meeting with the task force, told one of our correspondents that reports and recommendations were still being awaited from some state governors as of Thursday evening.

He said, “PMB was supposed to be briefed this evening (Thursday evening), but we had to delay because we are waiting for reports and recommendations from some affected states. All things being equal, the President will be briefed on Friday and will take necessary actions.”

“What this means is that there is a likelihood of extension, but it will be done only after due consultation with the states.”

However, a senior official of an isolation center in Abuja told one of our correspondents that a recommendation had been made for an extension.

The source said the move had become necessary because of a suspected community spread.

The doctor, who wished to remain anonymous, said some persons, who tested positive for coronavirus, had not traveled before.

He said, “We in the FCT have recommended an extension of the lockdown because we believe we are now facing a community spread. For instance, one of the people who tested positive is a cook that has never traveled before.

“The cook’s boss recently returned from outside the country, but the boss tested negative. So, where did the cook get it from? We are also working on a report by the World Health Organisation that COVID-19 can be spread through currency.

“We have submitted our report to the case management team, which will, in turn, submit a report to the emergency operational committee for final submission to the presidential task force. However, we did not state in the report how many days should be added to the lockdown. We don’t know if our recommendation will be accepted.”

It was also gathered that the lockdown might be extended to all parts of the country to enable health workers conduct more tests and fish out people who had contracted the virus.

“More states are recording COVID-19 cases. We may also consider the possibility of making the lockdown nationwide, at least for a week. We cannot rule out the fact that there is COVID-19 in states that have not recorded any case,” another official said.

PMB had in a nationwide broadcast on March 29, ordered the lockdown of the FCT, Lagos and Ogun states for two weeks beginning from 11pm on March 30.

According to him, the lockdown will enable the government to trace and treat those who have contracted the virus.

More than a week that the lockdown began in Lagos State and the FCT, COVID-19 cases in the country has jumped from 111 to 290, with the virus spreading to 16 states.

Presidential Task Force on COVID-19 in Lagos on Tuesday said before the end of this week, it would submit its report to PMB, who would decide on the lockdown.

Besides the FCT, Lagos, and Ogun states where the President had ordered lockdown, some states including Osun, Kwara, Plateau and, Rivers had also taken similar action.

We have collected data for possible lockdown in all states – PTF

During the meeting with the National Assembly leaders, the Chairman of the Presidential Task Force, Boss Mustapha, said the PTF had collected necessary data on measures including lockdown in all states.

He stated, “There is an acquisition of intelligence data to guide implementation of control measures such as may emanate from restrictions and or lockdowns of parts or all of the states.”

The PTF chairman noted that Nigeria had increased the number of molecular laboratories from five to nine, which would rise to 11 on Friday (today).

Mustapha said there was a mobilisation of resources at the states and local government areas in preparation for the possible spread of the coronavirus to communities.

According to him, strategies adopted by the PTF in conjunction with the states, include testing, detection, isolation, contact tracing and, management.

Mustapha also said, “For transparency and accountability, the PTF will not be directly involved in the collection and disbursement of the cash donations for COVID-19. The Accountant General of the Federation has already published the account details for collection through some commercial banks and also provided the modalities for its utilisation.

“All the main COVID-19 accounts shall be domiciled in the Central Bank of Nigeria. However, all non-cash donations shall be duly received by the PTF, acknowledged, documented and appropriately deployed.

“The COVID-19 pandemic has stolen both our health and our wealth. The impact of this is not only on the national economy but on the poor, the aged, the sick and the vulnerable. Out of concern for these categories of persons, the President has approved a stimulus of over N500bn and the employment of 774,000 Nigerians.”

The President of the Senate, Lawan, advised the PTF to work on the harmonisation of the funds contributed by organisations and individuals to combat the coronavirus, noting that there must be an effective service delivery to Nigerians.