Coronavirus: Boris Johnson moved out of intensive care but remains in hospital 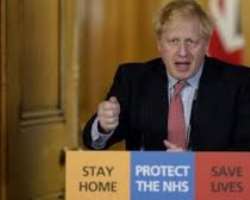 The prime minister is "in extremely good spirits" during the "early phase of his recovery", Number 10 says.

Boris Johnson is out of intensive care and in "extremely good spirits", Downing Street has said.

The prime minister has been in St Thomas' Hospital in London since Sunday evening, when he was first admitted for tests.

The action was taken because Mr Johnson continued to have persistent coronavirus symptoms, more than a week after testing positive for COVID-19 .

His health deteriorated on Monday afternoon to prompt NHS doctors to move him to an intensive care unit.

But Mr Johnson's condition has now improved to the extent he is no longer receiving critical care - although he remains in hospital, Downing Street said on Thursday evening.

A Number 10 spokesman said: "The prime minister has been moved this evening from intensive care back to the ward, where he will receive close monitoring during the early phase of his recovery.

"He is in extremely good spirits."
Sky News.