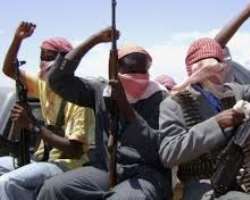 The most embarrassing incidents that President Muhammadu Buhari and his officials would need to explain sufficiently to the World is the fact that even when the same government has deployed soldiers and regular armed security forces to enforce a two weeks lockdown to contain the spread of the CORONAVIRUS PANDEMIC IN NIGERIA, the same government in its usual dreadful characteristics has allowed armed Fulani herdsmen and affiliate armed felons to embark on a rampage and to unleash cocktails of bloodshed in parts of Southern Kaduna State, Benue and Plateau States. Also in another devastating and grave human rights violations in an outskirt of Kaduna the other day, armed policemen detailed to enforce the curfew imposed by Governor Nassir Elruffai who is on quarantine after testing positive for Covid-19, these daredevil policemen allegedly killed five youths for allegedly defying the curfew in Kaduna state. In Taraba state Jukun militias are reportedly slaughtering tivs and vice versa".

"HURIWA is concerned that a government that has forced people to remain indoors even amidst poverty, poor electricity and hunger, has equally failed in its primary Constitutional duty to SAFEGUARD LIVES AND PROPERTY OF THE CITIZENS FROM THE MURDEROUS ATTACKS OF ARMED FULANI HERDSMEN. The report emerging that no fewer than nine persons were in the last forty eight hours feared killed in morning attacks by militias on Mbamena and Jootar communities in Ukum Local Council of Benue State is disappointing and shocking to put it mildly. The attacks on Jootar a settlement bordering Benue and Taraba which led to the reported killings of scores of people could have been avoided if the Federal government is responsive to its primary Constitutional duty to the citizenry even when the same government ordered all economic activities shut.

In the assault on Jootar, a settlement bordering Benue and Taraba states, three persons were eliminated by suspected Jukun militias while the one at Mbamena that led to the death of six was reportedly perpetrated by militias from Tongov area who were allegedly on a revenge mission."

Worried by these spate of violent attacks by all kinds of armed militias including armed Fulani herdsmen, the Prominent Civil Rights Advocacy group-: HUMAN RIGHTS WRITERS ASSOCIATION OF NIGERIA (HURIWA) has categorically affirmed that the Federal Government has failed in its main duty of securing the lives of the very same citizens that it ordered to embark on a two weeks lockdown just as the Rights group wondered whether the Inspector General of Police Mohammed Adamu decided to deploy armed policemen to only cities and thereby exposing the rural communities to the rampaging bloodshed orchestrated by armed mass killers of different species. HURIWA is finding it inexplicable that the Department of States Services are unable to arrest these armed hoodlums that are unleashing a regime of incessant killings of Nigerian Citizens and thereby making the citizens to lose faith in the ability of President Muhammadu Buhari to secure the territorial integrity of Nigeria and to secure the lives of Nigerians which basically are his primary duty as spelt out in the Constitution of the Federal Republic of Nigeria of 1999 as amended.

"HURIWA is worried that the killings which started since few years back have not been put under control by armed security forces to an embarrassing extent that even in this lockdown armed attackers according to a source in Gbra-Zongo village in Plateau State where the event happened, who hinted a media reporter asserted that the assailants, numbering about 20, invaded the settlement in the early hours of the day, shooting sporadically into the air and slaughtering four persons including a clergyman and these invaders were never confronted by the Police or other security forces. How can armed hoodlums suspected to be armed Fulani herdsmen attack this village for over six hours and were not confronted by the armed policemen or soldiers? This shows that there is either a compromise or failure of intelligence and unfortunately this has continued for over four years but yet there is a Federal and state administrations in place. These crimes against humanity will definitely be accounted for by President Muhammadu Buhari and his officials unless the government will immediately round up the killers and their sponsors and prosecute them in the complete Court of law. "

Relatedly, the Rights group said the reported slaughter of half a dozen youths in Kaduna by the Kaduna State Command of the Nigerian Police Force for reportedly breaching the curfew put in place by the state government in an effort to contain the spread of the CORONAVIRUS PANDEMIC IN NIGERIA was absolutely unlawful and amounts to extrajudicial killings which must be transparently investigated by the National Human Rights commission and other international and local Non-governmental organisations like Amnesty international Nigerian office; Human Rights Watch just as the Rights group said it has already drafted some investigators to collate information that may be passed on to President Muhammadu Buhari to take action or the group will be forced to appeal to the International Criminal court in The Hague Netherlands so these police killers are made to face the music.

HURIWA said it was regrettable that six youths were feared killed in Kaduna State after an alleged clash between the police and traders which began when traders at the Sabon Garri-Trikania market had trooped out for business activities when they could no longer bear the brunt of the stay-at-home order by government. "How can the Nigerian Police Force that is paid from the PEOPLE's commonwealth be sent to turn their deadly weapons that should be used to defend the citizens to now kill the same people they are supposed to protect? How can extrajudicial executions be the sanctions for breaching the curfew put in place by the State government? What kind of state administration will take joy in killing her citizens that elected them to develope their state?".

"From the evidence generated so far by a section of the media it is clear that the men of the KADUNA STATE police command lacked professionalism and committed acts of intentional murders when it decided to employ the use of weapons of mass destruction to enforce the coronavirus (COVID-19) lockdown order going by the available body of eye witness accounts that armed policemen were said to have opened fire to disperse the traders who were compelled by massive hunger and the absence of any forms of palliatives to cushion the effects of the fourteen days curfew and then decided to open for business to try to beat the massive hunger".

"HURIWA strongly canvasses the transparent investigations of these crimes against humanity and for the armed police mass killers to be charged for multiple murders in the competent Court of law in Nigeria or be dragged to the International Criminal court in The Hague Netherlands".