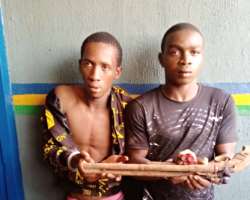 The Police Public Relations Officer for the Command, Abimbola Oyeyemi told The Niherian Voice that the suspects, Korede Pariosho and Jide Afolabi were said to have killed Ajomale on the 5th of April 2020 in Ijebu-Igbo.

They were arrested following an intelligence based investigation embarked upon by the detectives at Ijebu-Igbo police division led by DPO Sp Kazeem Solotan which led them to the hideout of the group where the duo were arrested and the gun they used to kill the victim was also recovered.

The PPRO said the hoodlums had on 5th of April 2020 attacked their victim in his house situated at 20 Odo Balogun Street Oke Sapen, in Ijbeu-Igbo where the deceased was shot on the head and stomach in presence of his pregnant wife, consequent upon which the victim died on the spot.

"Since then, police has been on their trail before they were finally apprehended following painstaking intelligence and technical investigation."

"On interrogation, the two suspects confessed killing the deceased but they claimed to have done it in revenge of the death of one member of their cult group whom they alleged was killed by OPC men in 2017."

"They further confessed to have vowed since then that any member of OPC seen will be killed in vengeance of the death of their late colleague", the PPRO said.

The Commissioner of Police in the state, CP Kenneth Ebrimson ordered the immediate transfer of the suspects to homicide section of the state criminal investigation and intelligence department for discreet investigation and prosecution.