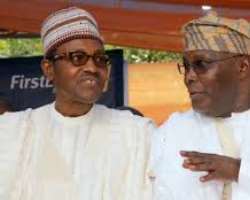 In a language that betrays a deep contempt, Atiku dismissed the team for its inability to “think outside the box”.

Atiku passed the verdict in a long essay circulated today on how Nigeria and Africa can surmount the effects of the coronavirus.

Atiku argued that the oil price crash should not be enough to trigger an economic crisis.

Atiku argued said the situation does not call for panic.

“After all, the current price of oil was lower than it is today when President Obasanjo and I assumed office on May 29, 1999. Yet we paid off Nigeria’s entire foreign debt.

“However, there are two remarkable differences. The first is that we had a stellar cabinet between 1999-2007.

“We had the right people manning our economy.

“We certainly would not have proposed to take out a $500 million loan to digitalise the Nigerian Television Authority, or devote ₦37 billion to renovating the National Assembly complex (which was built from the scratch at less than 20% of that amount)”, he said.

Atiku pummelled the Buhari government further:
“Today’s Nigerian government is severely lacking in qualified hands. And nothing proves this than the state of the Presidency itself.

“To think that after devoting ₦13 billion to the State House Clinic in the last five years, it is virtually useless as we face the most significant public health challenge of our national life. That is a pointer to the state of our federal government”.

“Why is it that the Nigerian government is always quick to want to borrow at every instance?

“It shows a lazy mindset and an inability to take those sacrifices necessary to get the economy into shape.

” Worse still it proves that we do not, as of yet, have the ability to think outside the box for genuine solutions.