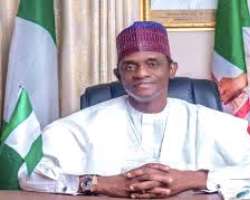 In an effort to cushion the sufferings of the Physically Challenged Persons sequel to the stay at home directives, Yobe State Emergency Management Agency (YOSEMA) has distributed food items to some members in Damaturu.

The distribution which was spearheaded by the Executive Secretary of Yobe state SEMA, Dr. Mohammed Goje had beneficiaries from over 150 families or households.

Dr. Goje said the support was aimed at minimizing begging on the streets and at gatherings to avoid social risk of spread of COVID -19.

He added that the support was also part of Governor Buni’s administrative drive towards cushioning the sufferings of the Physically Challenged Persons as they abide by the sit at home directives against the spread of Covid-19 Pandemic.

The Executive Secretary further noted that those who engage in petty trading and begging in some cases, are usually first hit and worse hit during the lockdown while considering Damaturu, the state capital as one of the high risk COVID-19 LGA as the door to door food support was extended to the physical challenged persons

The leader of the Physically Challenged Persons , North East Chapter of the All Progressive Congress (APC), Comrade Mohammed Abba Isa expressed gratitude and appreciation to Governor Buni's gestures and assured him of their continuous support to all government policies and programmes including campaigns against the spread and prevention of Covid19.

Isa also prayed for the progress and Development of state and Nigeria at large.