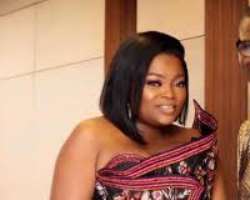 A frontline Civil Rights Advocacy group-: HUMAN RIGHTS WRITERS ASSOCIATION OF NIGERIA (HURIWA) has called for the arrest and prosecution of the minister of state for Federal Capital Territory, Ramatu Tijani Aliyu for alleged violation of the anti-Covid-19 stay -at- home order and social distancing regime as she went about supervising the fumigation of some areas of the metropolis in Abuja alongside dozens of residents and a large retinue of hangers on and staff.

HURIWA has similarly comdemned the decision of the Lagos State commissioner of police and the Attorney General and commissioner for justice for reportedly arresting and prosecuting at the Magisterate Court of the renowned entertainer and actress Mrs Funke Akindele, her husband and another Musical Maestro Naira Marley for offences of failing to observe the anti-Covid-19 curfew.

The Rights group said the popular entertainers were made scapegoat by the state for pure populism and to attract public acclaim and divert attention from the heightened accusations of abandonment of the poor families by the Lagos state administration even after picking up N10billion Covid-19 fund.

"This choreographed detention and prosecution of Funke Akindele and co was ochestrated as a perfect diversionary tactics to keep people busy talking about it whilst not remembering that some Lagos residents angrily rejected loafs of bread donated to them as relief materials by some officials. This was just some kind of exhibitionism by the Lagos state administration to try to hoodwink the gullible people that it is working even when government has failed to address the larger issues of forcing families to stay at home with no electricity power and no clean water supplies to millions of Lagosians as we write. In as much as we are not condoning lawlessness, we believe that Funke Akindele and her family are victims of a lynch mob social media justice advocates who found an ally in the Lagos state administration that yearns to divert attention from some deep rooted social failures during this Covid-19 curfew. Her conviction is illegal and we urge her to repudiate her guilty plea and file an appeal making use of the services of a smart legal team to overturn the charade of a court decision done by a court whose prosecution team also failed to observe social distancing rule as can be seen from the photo taken from the entrance of the court room".

HURIWA recalled that Actress Funke Akindele-Bello who was arrested on Sunday April 5th by the Lagos state police command for flouting the social distancing order of the Lagos state government, spent the night at the State Criminal Investigation Department SCID office in Panti, Lagos and was subsequently arraigned in the magisterate court whereby she reportedly pleaded guilty to the charges and was slammed with a month in prison or a fine of N100,000".

In the charge preferred by the attorney-general of Lagos State, the couple were accused of committing the offence on Sunday on Amen Estate, Ibeju-Lekki.

HURIWA recalled that the charges affirmed that: ”You, Funke Akindele and Abdulrasheed Bello, on the fourth day of April 2020, at 9 Gbadamosi Close on Amen Estate, Ibeju-Lekki in the Lagos Magisterial District, gathered at the aforementioned address with over 20 persons, contrary to the social distancing directive of Mr Governor of Lagos State, made pursuant to Regulation 8 (1) (a) and (b) and 17 (1) (I) of the Lagos State Infectious Disease ( Emergency Prevention) Regulation 2020, and thereby committed an offence punishable under Section 58 of the Public Health Law of Lagos State,” prosecution stated in the charge sheet.

HURIWA recalled that the News Agency of Nigeria (NAN) reports that the police had on Sunday arrested Akindele for organising a party which violated social distancing regulation of the Lagos State Government.

The regulation is to check the spread of Coronavirus.

“The attention of state police command was drawn to a viral video showing large number of persons mainly in the entertainment industry on an estate in Ajah, Ibeju-Lekki axis.

“They were celebrating a birthday party organised by Funke Akindele-Bello and her husband.

“Police detectives from the state CID, Yaba, were promptly drafted to the location and Akindele was arrested,’’ the state Police Public Relations Officer, DSP Bala Elkana, has said in a statement.

HURIWA recalled that the Lagos Infection Diseases Regulations 2020, prescribes a jail term of one month or N100,000 fine or both for any one found guilty of hosting gatherings or flouting the lockdown order even as the regulation act in part reads “Where there is a violation of a closedown or stay-at-home order, security agencies shall have the power to arrest without warrant and may detain any person, who violates the closedown or stay-at-home order, for at least 48 hours. “Where the arrested person is found guilty, the person is liable to a fine of N100,000 or one month imprisonment or three months’ community service.”

HURIWA however carpeted aspects of the regulation as violations of the fundamental human rights provisions in chapter 4 of the Constitution of the Federal Republic of Nigeria of 1999 as amended regarding Right to privacy and stated that the aspect of the regulation that does not require arrest warrant before the law enforcement agencies can invade the privacy of PEOPLE's homes is unlawful because that is tantamount to legalizing ARBITRARY ARRESTS AND detention which the Constitution frowns strictly against just as the group said the overzealous police operatives have started abusing some of these bogus and illegal provisions of the Regulation to violate the rights of citizens with reckless abandon.

HURIWA has also accused the Police of double standards for failing to arrest the serving FCT minister of state Ramatu Aliyu and her security details who thronged a section of Abuja Yesterday for fumigation of some areas of Abuja without the government and security officials observing social distancing and worst still the minister was quoted as posting the photo on her social media handle.

"Is the Nigerian law not supposed to apply to everyone? Why was Funke Akindele arrested and charged for flouting the curfew when she only held a social party of few guests compared to the Abuja minister of state who gathered nearly one hundred people in a place to commission the jamboree of fumigation of Abuja markets? This double standards defeat the Cause of Constitutionalism".