Adeyanju: Between activism and opportunism 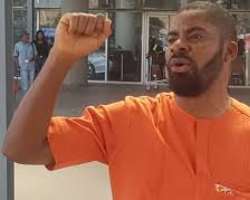 In the final minutes of Thursday April 2, 2020 Deji Adeyanju (forget the comrade title he bestowed on himself) tweeted “The problems we had in 2015 are worse now. Our economy is worse. Our currency is more hopeless. Insecurity is worse. Corruption is worse. So why was changing PDP necessary?” Adeyanju described himself in his Twitter profile as “Activist. Prisoner of Conscience. Anti-Government, Pro-people. Convener, @ConcernedNIG” which largely ignored what many critical Nigerians think is his most important role, designation and conviction: anarchist.

Prior to his arrest and being held in custody while on trial for murder, Adeyanju, in the eyes of many critics, had shown the opportunistic streak associated with several so-called activists. What is the value and benefits of those they lead in different protests some of who often suffer all sorts of harm each time there is problem with the law enforcement agencies? His case is not the chicken and egg conundrum but rather he went into custody on several times for different criminal allegations against him.

The beating he reportedly received at the hands of the protesters at the free Omoyele Sowore riots was not responsible for his porting to this questionable side. He mislead the public into believing that he was almost lynched by a random gang of hoodlums. But the other side of the narrative in some quarters is that, his beating was, probably, linked to an allegation that some fellows protested failure to pay hired anti-government protesters and so went violent against those that hired them. You can chose which side of the story to believe.

In all probability, Adeyanju might not be a total stranger to this controversial brand of activism in Nigeria. He is a sympathiser to the dreaded group, the Islamic Movement in Nigeria (IMN), whose protests were marked by violence, arson and deaths. Is it not interesting how the sect deployed violent tactics against the state? They have since learnt that it is a slippery slope from which there is no climbing back. The taste for violence and killing that this kind of activism taught the sect is not one that can be given up easily.

Rather than speed up the release of their leader, Ibraheem el-Zakzaky, who is standing trial for allegations of sundry crimes, the strategy introduced to IMN has led to the earning of the label of a terrorist organization while further diminishing whatever sympathies Nigerians hitherto felt for the sect.

It is therefore no surprise that at a time that the world is focused on slowing the spread of the COVID-19 virus, IMN is not trending; the potential revenue from that group has dwindled as it became evident that its leader has a case to answer before the court. The virus is also not trending for pseudo-activism and their practitioners.

For Adeyanju, for instance, what is trending now is to furiously retweet the attacks emanating from PDP, People’s Democratic Party (PDP) against the government in power. Adeyanju's Twitter timeline is an aggregator that has produced one collage of hate as expressed by his followers and associates in the bash-the-government competition.

Going by widely acclaimed antecedents of Adeyanju as an activist who gravitates towards opportunism where personal interest is higher, the emergency love for promoting PDP has little to do with being partisan, which he should not be if he were truly an activist that is interested in the improvement of Nigeria. Is his support for PDP for public good or pecuniary interest?

Is it a surprise that Adeyanju is a great sympathiser of a disorganised opposition party, PDP, that is reportedly committed to destabilizing the government of the day after its bitter loss at the 2019 General Elections, which the likes of Adeyanju failed to swing for it in spite of a long running campaign of calumny against President Muhammadu Buhari and his All Progressives Congress (APC)?

It is noteworthy that at the height of the electioneering in 2019, the PDP was said to have plans A, B and C. Plan A was said to fraudulently win the vote through a combination of propaganda, fake news and compromising the process through rigging and violence – that included hiring terrorists and foreign mercenaries to create the impression that the country was not safe enough to have the elections. Plan B was to precipitate anarchy when PDP loses the election such that the military could be forced to step in and at some points return power to the opposition party. Plan A and B failed spectacularly of course and now the implementation of Plan C is ongoing with hired strategic executors and you can easily guess these paid strategic executioners.

This time, Plan C is to repeatedly discredit the government with anything the opposition and controversial activists like Adeyanju can lay their hands upon. The intention is to blame the government for everything from the economy to the spread of Corona Virus such that citizens will get angry to the point where they will take to the streets and sack the government. This is why they are making comparison between now and the period when PDP was in power.

They are also making efforts to whip up ethno-sectarian sentiments in the military and security sector with the intention of creating factions in the military that they can use to hack their attempt of “Masses Uprising” overthrowing the government. This was why they cast the recent redeployments in the army in ethnic light in the hope that they can create and deepen disaffection within the ranks. The military will have to be at alert as this syndicate will execute even more sinister plots aimed at undermining the system for them to have their way.

These plans are bound to fail. The basis of their argument is flawed, and the average right-thinking person can easily see through the disinformation they are attempting. The world over, economies are taking severe beating from COVID-19 to the extent that the global economic concept and practice will be redrawn when the virus is done. So what point are the PDP and Adeyanju trying to make about the Nigerian economy and currency being worse off when everything has melted down globally?

As for insecurity, the logical thing is for Adeyanju and the PDP to start by assisting the country by asking their mercenaries to stand down so that the military and security agencies can deal with whatever is left Only the cessation of these distractions as well as sponsored violence will allow Nigeria to be peaceful to the point where it can become prosperous and the citizens at peace.

But again, how will those who hate stable democracy and prosperous Nigeria feed if Nigeria is at peace and everything resets to normal?

Duniya writes this piece from Kaduna.