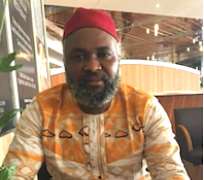 My attention was called by my lawyer to a write up uploaded on some social media platforms by a United States of America-based Azuka Jebose in which he alluded to my connection with or alleged ties with the Delta State born Billionaire statesman and political tactician, Prince Ned Nwoko which in his warped imagination may have informed my interventions in the allegations of human rights violations that took place for months in a once peaceful community of IDUMUJE UGBOKO. It must be stated that the Federal government of Nigeria is now seized of the facts and the allegations which the chief law officer of Nigeria adjudged to be terror-related offences subject to the determination of the competent Court of law.

Well, I read his mombo jumbo of a hurriedly written piece full of innuendos and have every imprint of a write up coupled up either in a beer parlour in one of the remotest parts of God knows where in the United States of America. The piece began by dwelling on series of irrelevant hearsays and half-truths and ended tragically like a tale told by a man set out for mischief and malice who should be sympathized with rather than take him up on those libellous affirmations he made and his open invitations for a lynch mob attack on my person or the person of Prince Ned Nwoko whom he mistakenly believed has paid me handsomely to delve into the raging matter that has just been instituted in the Federal High Court of Nigeria in the Abuja division.

First and foremost, i make considerable haste to say that those incoherent allegations aforementioned are untrue as they relates to me and totally false on the person of Prince Ned Nwoko considered by his people as one of their most illustrious philanthropist with a humane heart..

But I have not been hired to speak for Ned Nwoko even though I am by profession a Media worker.

My decision to write this and others that have been published in the last three years are motivated by the need to restore lasting peace in IDUMUJE UGBOKO and for those who approached the National Human Rights commission through HUMAN RIGHTS WRITERS ASSOCIATION OF NIGERIA (HURIWA) to gain a sufficient redress of their dehumanization. We have absolutely nothing to do with the irrelevancy of a squabble for the traditional stool of the ancient kingdom. Our interventions are purely for the sake of human rights of those who approached us and the National Human Rights commission lawfully with petitions alleging that their fundamental human rights of these citizens have been violated with reckless abandon by those that are now charged before the Nigerian court system.

Some of these persons have died as a consequence of the physical torture allegedly inflicted on them by some or all of those that the Central government of Nigeria have decided to institute a case of terror related charges for which they will be fully represented in the Court of competent jurisdiction and will have their day. This is what the constitution says about the court system of Nigeria in Section 6 of the Constitution of the Federal Republic of Nigeria of 1999 as amended.

Now, the implication of this section as it relates to these Nigerians from IDUMUJE UGBOKO community charged to court for terrorism is that they will be given fair hearing in line with section 36(5) of the Supreme law of Nigeria and they will be afforded every opportunity in this World to contradict the terror related charges filed against them and they have three stages to do this that is assuming without conceding that they may lose.

They have the opportunity at the Court of first instance, the Court of Appeal and the final appellate forum which is the Supreme Court of Nigeria.

So it is not as if once they are dragged before the court of first instance that they would be denied justice and an adversarial verdict imposed on them without any right of appeal. My humble advice is that the matter should be meticulously monitored to ensure that justice is not only done but it seen to have been done.

This is farther from the truth that these accused persons mau be denied of justice or that a big man somewhere will financially induce the Court to reach a preconceive conclusion.

Again, it is nonsensical and irrational to assert that Prince Ned Nwoko is behind the decision of the Nigerian government to so institute the charges against his community's associates and brethren.

The much i know from my nearness to IDUMUJE UGBOKO, Prince Ned Nwoko is a man of peace who doe not believe that anyone should be enslaved and dehumanized based on class, status or economic standing. The last name anyone will call Prince Ned Nwoko isto accuse him of being an oppressor. This is a man i have been told has sponsored at least five thousand indigent scholars through the different school system from High school to college. A man that has sheltered the homeless and has fed the hungry and a man that does not discriminate on the vasis of religion or political beliefs. Without soynding immodest, I think Prince Ned Nwoko is a good man. He is the man behind the current crusade to find lasting cure to malaria fever and he has donated generously to the efforts of government to contain the spread of the CORONAVIRUS PANDEMIC IN NIGERIA. How can such a man with a heart flowing generously with the milk of human kindness be an oppressor?

It is therefore a fallacy to say that an individual in the person Prince Ned Nwoko can influence the very serious charges of terrorism against his own people when he has nothing to gain.

He has no such power or connection to so determine.

He is of the opposition Peoples Democratic party and above all, he is a Lawyer who knows that nobody no matter how powerful can manipulate the judicial wheel of adjudication to run at the person's whims or caprices.

I think we need to even understand what the law says about terrorism in Nigeria and then look at what charges have been brought against those accused persons from IDUMUJE UGBOKO COMMUNITY including but not limited to one of the Princes.

Terrorism and insecurity are twin evils which have bedevilled the Nigerian State for high on now. Although the term “terrorism” has poses legal definition challenge, its peculiar characteristics manifest in motive founded on ideology, identifiable by signature violence and targets primarily intended to compel compliance.

In the wake of the 9/11 terrorist attacks in the USA, the United Nations Security Council (UNSC) passed Resolution 1373 which required member states to make not only terrorism a serious crime in domestic legislation along with terrorists funding and but also other ancillary offences. The first direct attempt at tackling the problem was included in some sections of the EFCC (Establishment) Act 2004. A comprehensive Terrorism Bill was proposed at the National Assembly 2005 but did not pass into law. However, the situation changed with the passage of the Terrorism Prevention Act of 2011 which was amended in 2013 (referred herein as TPA).

Be that as it may, the problem of Nigeria is not the lack of applicable laws in the different spheres but lack of proper or outright non-implementation. This is so much a norm that it is said our laws are better observed in breach. Government and the public cannot be on different levels of operation and expect to have a sane society, more so that the twin evils of terror and insecurity are largely by products of people-government interaction and to a large extent a measure of the state of health of the relationship. This makes this discourse a most relevant one at this time of our national life. With these reflections in mind, it will be preposterous to conclude that an indiviual outside government has the capacity to rope his kinsmen into terror related charges as if that 'godfather' is the appointing authority of the Federal Attorney General and minister of justice. This is a joke taken too far.

Now look at what the government (not Ned Nwoko) has alleged that these set of persons from IDUMUJE UGBOKO community have done for which they will have their day in court of competent jurisdiction and not court of cigarettes' smoking and wine quaffing jesters.

Recall that a statement issued by Comrade Salihu Isah, the Special Adviser (as he then was) to the Attorney General of the Federation, Abubakar Malami, SAN said the Federal Government following investigations into the case had decided to file the charges against the accused persons for violating the nation’s anti-terrorism laws. He said that they are to be arraigned before Justice O.E Abang of the Federal High Court, Abuja. The nine others charged with the prince were Dennis Uwadiegum Nwoko, Ndudi Chijiume, Nwochie Agiliga Light, Raymond Omosiete, Adim Nwafor, Okey Ifejoku, Azuka Mukolu, Omoye Esonye and Aikhomo Omezi.

The Principal State Counsel, Mr. Magaji Labaran of the nation’s Department of Public Prosecution, Federal Ministry of Justice alleged that one of the culprits, Ejimofe Nwoko between May 18-25, 2017 at Idumuje-Ugboko in Delta state conspired with the ten others to commit an act of terrorism punishable under Section 17 of the Terrorism (Prevention) Amendment Act, 2013. They were specifically alleged to have committed act of terrorism by burning houses belonging to members of the community among whom were Chukwuma Nwoko, Chief Chris Ugwu, Victor Omezi, Peter Bama, Nwoko Kachido and killed Cyprian Kumaorun within the community amongst others as the Court will decide in series of open hearing sessions.

From records, 4 of The defendants were arrested between November last year and February this year. 6 are still on the run. They were arrested on court bench warrant and are being held at Kuje prison.

One of the victims of the alleged act of terrorism was Chuks Kennedy who allegedly later died from his severe injuries. His wife who was 6 months pregnant at the time was severely beaten and allegedly taken to the palace for the pleasure of Nonso Nwoko.

These and many other informations were generated by the National Human Rights commission; office of the then Assistant Inspector General of Police (BENIN) who is now IGP of Nigeria Mohammed Adamu and the federal Attorney General and minister of justice.

In my capacity as a human rights activist, I expected Azuka Jebose who is a writer to dwell on only facts if he desires to help those Citizens who are allegedly now in comflict with the law of the Country and are now facing the law rather than using his time and resources to disseminate and peddle falsehoods and totally destructive libellous assertions calculated by him and are intended to arouse passion and to instigate violence against the persons he has tried unsuccessfully to damage.