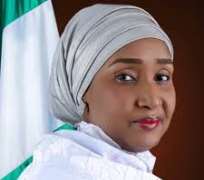 Nigeria Minister of Humanitarian Affairs and Disaster Management, Sadiya Farouq, has been accused of nepotism in the allocation of the federal government’s Stimulus packages to it’s citizenry in order to cushion the negative effects of the economic and social lockdown over the Coronavirus pandemic, known as COVID-19.

Ohanaeze Youths Council (OYC), the apex Igbo socio-cultural organization, in a statement jointly signed by it’s President General, Mazi Okechukwu Isiguzoro and the Secretary General, Okwu Nnabuike and made available to newsmen on Saturday in Umuahia, claimed that the Minister was sectional by denying Igbos their legitimate rights to benefit from the palliatives.

The group alleged that the activities of the Minister had posed a big threat to the lives of the people of the South East, urging the federal government to integrate South east zone in the provision of stimulus packages to cushion the effects of the lockdown.

But the Minister of Humanitarian Affairs and Disaster Management, Sadiya Umar Farouq, insisted there is no favoritism in the palliative support.

Farouq made this known while speaking to reporters at the presidential task force media briefing during the week.

The Minister claimed that over 2.6 million households have so far benefited from the N20,000 Coronavirus palliative issued by the federal government.

According to the Minister, over 11million vulnerable persons have been identified in 35 states who are yet to benefit from the palliatives. 2.6m households are from the FCT, Nasarawa, Katsina and Anambra states.

However, Ohanaeze Youth Council (OYC) demanded the resignation of Sadiya Farouq, for allegedly sectionalizing national affairs to the detriment of people’s lives.

Part of the release stated, “We condemn vehemently the vituperative rhetorics of the Minister, Sadiya Farouk, which says, ” Igbos and people in the South, should not expect any money from Federal Government to cushion effects of the coronavirus.

“She is no longer fit to be a Minister, and the only way to assuage her provocative action meant to assault the sensibility of Igbos, is for the Presidency to relieve her of her duties in order to exonerate the Federal Government of her unpatriotic and nepotistic attitude capable of truncating our democracy and which remains a threat to the unity of Nigeria”.