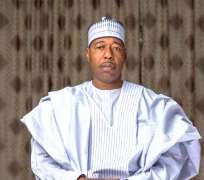 Borno State Government has denied reports of alleged record of 2 Cases of COVID-19 from 2 military personnel in Monguno town of Monguno LGA, Borno state as reported in some social media and online newspapers but not The Nigerian Voice.

The state government also said that the National Center for Disease Control (NCDC) yesterday Monday, 30th March 2020 in a statement made available to the Borno State Commissioner of Health, Dr. Aliyu Salihu Kwaya Bura denied the report and even posted same denial statement on it's Twitter handle.ptpp//covid+ 19.ncdc.org.ng and shared through its Twitter handle on same day.

The Borno State Commissioner of Informatiion, Culture and Home Affairs, Malam Babakura Abba Jatau stated this Tuesday in his office at a press briefing with journalists: "it is not true. It is a false news. It is fake, baseless and unfounded as we don't have any record of any case of COVID-19 as reported and posted on some social media and online newspapers". "We deny such report and urge all journalists to henceforth try as much as possible to verify and report facts objectively and professionally.

"Such rumor could easily jeopardise the good efforts of government and serve as a threat to the Measures that Governemnts have been putting in place to prevent the spread of the disease as well as protect the lives of it's citizenry.

"I urge the media to always confirm their reports first before rushing or going to the press. I also call on Monguno people especially to disregard such report. It is not true. It is falsehoid and fake news.

"As journalists we need to say the facts and accurately to the people in the society and not to fabricate stories that will raise tension or create panic.

"Everybody knows that the state government has been doing it's best to manage and control the disease and went as far as setting up a high powered committee headed by the Deputy Governor, Alhaji Usman Umar Kadafur .

"Similarly, from today Tuesday, vehicular movements have been restricted in and out of the state while number of passengers to be carried by motorists and riders have also been reduced in line with the federal government directives and health experts advises ", Jatau said.

He noted however that on the issue of commercial motorists and riders intending to increase their fares, he warned that nobody should do that or be found wanting as these were measures adopted for a short term to save lives of the people.

The commissioner called on all and sundry to cooperate with the federal and state governments as well join them in prayers to make Borno state free from COVID-19 while appealing to the commercial drivers and riders not to hike their fares during the two week period of curfew or restriction of movements.

Jatau however enjoined the media to verify their facts before going to the press and adhere strictly to their professional ethics especially at this crucial period of information dissemination, sensitization and awareness on the dreaded disease, COVID-19.