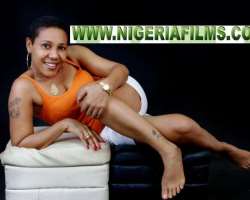 INollywood star actress, Shan George may be beautiful and have a good sense of humour but she is one woman who will not discuss issue of marriage with anybody due to the fact that she has been so unfortunate in that aspect. First, she was Mrs. Nwosisi then she metamorphosed into Mrs. Momoh Osigwe and later to Mrs. Jaiyeola and before one could start to register the latter to her name she switched over to her maiden name again, Ms. George.

She was recently asked why she has been so unfortunate in this regards and she allegedly fumed with rage and responded thus “I don't know o. sometime I ask myself why it happens like that. I don't know why my marriages will just collapse like a house that has no solid foundation. Honestly it bothers me, may be I am just unlucky”

While all these things are happening to the 'Outcast' actress, a lot of her friends who are so concerned about the way things are going for her, we learnt, advised her to go for spiritual cleansing or deliverance from one of the so called fire-for-fire pastors in town but she allegedly said to have declined and totally rebuffed such an idea. What could be wrong with this 'mallato' actress? Only divination can tell!