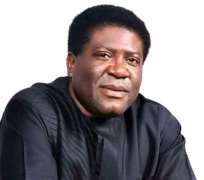 The former Deputy Governor of Imo State, Prince Eze Madumere has joined other well meaning Nigerians to congratulate the former Governor of Lagos State and the national leader of All Progressives Congress, Asiwaju Ahmed Bola Tinubu as he turns 68.

In a statement issued by his Media aide, Uche Onwuchekwa, Prince Madumere showered encomium on the National leader of APC.

According to the statement, Madumere salutes Tinubu for his role and sacrifices with other patriotic Nigerians towards enthroning democratic governance in Nigeria.

He also commended Tinubu over his effort in bringing about the needed competition in the polity, describing him as a true statesman whose patriotism is never in doubt.

He also prayed God to grant him many more years with good health as he continues to contribute his quota towards realising Nigeria of collective dream.

The statement reads in parts: "The former Deputy Governor of Imo State, Prince Eze Madumere joins other well meaning Nigerians to felicitate the former Lagos State Governor and National Leader of our our great party as he clocks 68.

"He deserves our accolades following his role , sacrifices and commitment alongside other patriotic Nigerians towards enthroning a democratic governance in the country.

"We cannot also forget in a hurry how Senator Ahmed Bola Tinubu brought competitiveness and vibrancy into Nigeria politics coupled with his historic role during the formation of All Progressives Congress (APC).

"It is our prayer that God grant him many more years with good health as he continues to contribute his quota towards a Nigeria of collective dream.