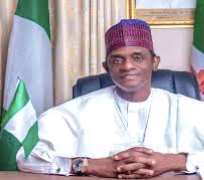 Yobe state Governor, His Excellency Hon. Mai Mala Buni, has directed the closure of the state borders from midnight of Tuesday 31st March, 2020 to guard against importation of the dreaded Corona Virus into the state.

A statement issued Sunday by Alhaji Mamman Mohammed, the Director General, Press and Media Affairs to HE Gov. Mai Mala Buni stated that the governor said it has become necessary following the spike in spread of the virus in the country.

He expressed gratitude to Allah (SWT) for sparing the state and its people since the outbreak of the Corona virus pandemic and the zero status of the state.

The Governor said in spite of the state's zero status, government had taken adequate measures by establishing isolation centers with equipment and constituting a committee on Corona Virus under the chairmanship of the state Deputy Governor, Hon. Idi Barde Gubana,

He said a Rapid Response Team was also established to closely monitor any suspicious case as we remain grateful that we have no single case up to this moment.

Gov. Buni urged the people to adhere to medical advises, avoid over crowded gatherings and washing of hands..

The Governor appeal to the people to cooperate with government and all the relevant agencies for a collective approach to the fight against the pandemic.

Gov. Buni also called on traders not to hoard essential commodities to hike up prices and create additional hardships to the people.

He called on the people to be calm and steadfast in prayers to seek divine intervention to save the state, Nigeria and humanity.