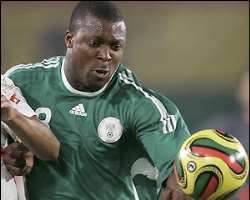 In what seemed like a show of shame, Yakubu Aiyegbeni and Obafemi Martins have confirmed Nigeria's exit from the 2010 World Cup with the loss of two clear chances at different times in the second half of the Super Eagles' game against South Korea.

The game that ended 2 -2 has seen South Korea and Argentina through to the second round from the group B category while Nigeria and Greece have been booked on a ticket back home.

'Aiyegbeni is a failure; even an eight year old boy could net that ball', an angry fan at one of the viewing centres in Lagos tells us.

It was back-to-back flops for the Nigerian team at the 2010 World Cup, with the Super Eagles losing their opening match to Argentina 0-1 (with superstar goalie Vincent Enyeama conceding one goal, despite how well he manned the post). They also lost 2-1 in a second match with Greece.

And tonight, they finally crashed out, after drawing 2-2 with South Korea.

The team is expected back home anytime from now.