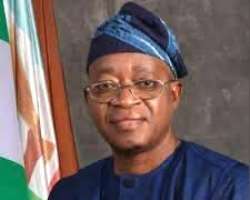 The Governor of Osun State, Mr Adegboyega Oyetola today announced closure of all land borders into the State with effect from Saturday, 28th March to contain the spread of covid19.

This was contained in a statement signed by Secretary to the State Government, Prince Wole Oyebamiji on Thursday evening.

The statement was made available to The Nigerian Voice by the Chief Press Secretary to the governor, Mr Ismail Omipidan in Osogbo, the state capital.

The governor also approved limited number of passengers that commercial vehicle within the state can carry.

Oyetola slao closed down major markets in the state from Friday, March 27 over covid19.

The governor said all shopping malls in the state would be shut, except for their pharmaceutical, foods and medical needs outlets.