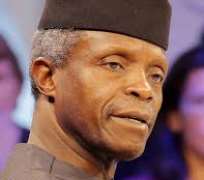 The Vice President of Nigeria, Prof. Yemi Osinbajo has tested negative to COVID-19 . It is believed that the test was carried out on the Vice President on Tuesday by the Nigeria Centre for Disease and Control (NCDC).

Prof. Osinbajo reportedly went into isolation after the Chief of Staff to the President, Abba Kyari tested positive to the virus on Monday.

Osinbajo has had several contacts with Kyari since he returned from Germany on 14 March where he contracted the virus.

The Chief of Staff never isolated himself and one of his contact was the Vice President, who always sit by him during executive council meetings.

It was also gathered that several top echelons in Aso Rock who may have had contact with Kyari had gone into self-isolation.

President Muhammadu Buhari narrowly escaped being infected with the disease as he tested negative for coronavirus.

As at Wednesday morning, the total number of confirmed cases in Nigeria had swelled to 46 following the announcement of two new cases in Osun and Lagos by NCDC.